Casting shorelines for trophy walleye with stick baits has been a favorite of mine for years. (Now that I think about it, I actually say that about a whole lot of presentations! But I seriously enjoy this style of fishing.)  Each spring we look forward to casting suspending jerk baits in shallow water for post spawn walleyes.  The ideal spring has a slow and steady rise of temperature, creating hungry and aggressive fish roaming shallow structures before they school up and head deep.

My husband Tyler and I have used this technique numerous times over the years, but there are three days in particular that stand out in my mind as supreme days on the water.  Up until recently both Tyler and I had our personal best walleyes casting stick baits in the spring; so of course, those two days stick out and this past season using Northland Fishing Tackle’s new Rumble series jerk bait, the Rumble Shiner.

My biggest walleye caught using this technique was in less than 3 feet of water (FOW) where I could see the entire sequence.  We were working our way shallow into a weedy bay, fan casting the area when we made a turn inwards and I cast out near a sand to muck break and started working the bait back – jerk, jerk, pause – jerk, pause, jerk, jerk.  As my retrieval neared the boat, I could see the shadow of a fish following and on a long pause the fish circled underneath the bait and shot up on the next jerk – I thought it was a small northern or musky from watching the strike, but its head shakes and behavior was more walleye-esque, so when we finally got a glimpse and were able to confirm it was a HUGE walleye I was trembling with excitement.  I honestly don’t remember the next pieces of the story, but being able to watch that fish hit was incredible. A 29 3/4” golden beauty!

The second time we were fishing a new body of water, it was early June and so hot.  We fished several hours with nothing as the sun beat down on us. After continuously casting with nothing to show for it we became hangry and stopped for lunch. (Well, it was me. I became hangry.) Just after lunch Tyler made a cast – fish on!  We continued casting down the shoreline and caught 22” – 29” walleye all afternoon. Fish were hitting boat side and I LOVE seeing a walleye come up, in attack mode, flare those gill plates and “pounce”.  It was an epic day and solidified our love for the suspending jerk bait bite! 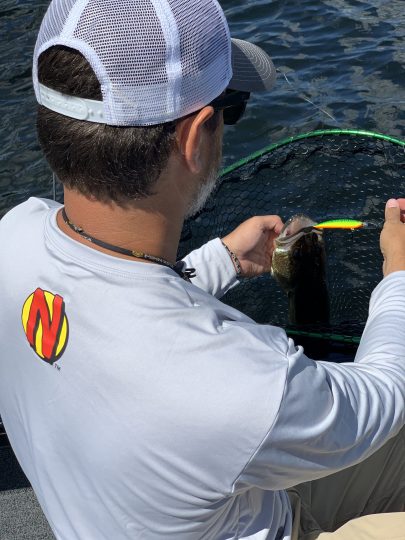 Needless to say, when Northland approached us about trying out a proto-type jerk bait originally designed for trolling but tweaked for castability and versatility, we knew it had some big shoes to fill. With seemingly everything in turmoil for the summer of 2020 it felt fitting that the lake we intended to visit and try out these baits on we couldn’t go to.  When our plans turned upside down our day turned from high anticipation to stress; stress that water temps would be less than ideal causing fish to be deeper and not as aggressive, and we wouldn’t be able to get the footage needed to film an episode using these baits.

Call them whatever you want: stick baits, jerk baits, slash baits, or twitch baits – all used interchangeably – a key attribute defining these baits is a longer, slender profile with a smaller lip that enables the bait to slash back and forth in the water.  There are many reasons why using a stick bait is the right tool to get the job done during various shallow water conditions; low light or stained water are other examples, but I am going to focus on springtime when fish are usually found in shallower water.

One of the main reasons to use jerk baits in the spring is because it’s a search bait. Search baits are any type of bait that can be used for casting or trolling that cover water “in search” of fish; designed for covering as much water as possible as quickly as possible. This helps locate patterns or structures that fish are utilizing.  In spring, fish like to use big expansive shallow flats, where they continuously roam searching for food.  Jerk baits let you cover water effectively by fan casting out away from the boat and creating vibrations on the retrieval cadence that entices those roaming walleyes, that are also searching for food, to chase, follow and hopefully strike.

Second, these bait types can also be used on a variety of structures, such as: downed timber, weed lines, rock bars, sloping shorelines or any kind of flat.  The lip of the lure will determine how the running depth, but you can also control it with the strength of your jerks and position of the rod tip.  For example, if you are casting close to downed timber and don’t want to get snug up initially you would give slow, softer pulls and keep your rod tip higher so the bait remains higher in the water column. As your retrieval brings it away from the tree limbs and into deeper water you can drop your rod tip and give faster, harder jerks for the bait to follow the sloping shoreline.  This same presentation is also key when fishing emergent weed beds. Third, the slow rising water temperatures of spring make ideal conditions for casting suspending jerk baits where post spawn walleyes are recovered, more aggressive and likely to chase.  With optimal water temps being between 62-72 degrees Fahrenheit shallow, post-spawn walleyes will mimic musky behavior by following lures and hit right next to the boat. And if you are lucky enough to find these fish in shallow, clear water you can observe their behavior and repeat the pattern that is triggering the most strikes.

Lastly, suspending baits display neutral buoyancy which creates the ability to suspend in the water column allowing the lure to remain inside the fish’s strike zone longer, giving it a more natural prey behavior.  Check lure packages for running depths depending on what water temp or structure you are fishing. But if you prefer a larger profile bait that says deeper running you can alter that to a shallower running depth using your rod tip if you are using soft, slow pulls.

For our first time out with the Rumble Shiners we each chose a different color scheme and varying size to be able to hit different sections of the water column and establish a pattern.  We drove the 1850 Crestliner out to our first spot, a shoreline with downed timber and shallow flats.  Downed trees are a classic springtime hangout for walleyes.  As we approached our spot we immediately noticed that water temps were a bit higher than we would normally prefer and after a few casts with no hits or follows we were both feeling the pressure; we couldn’t fish the lake we wanted, conditions aren’t ideal and this is not a good start.

After a few more casts around the trees – wait, let’s stop and talk about the tree in the water – not all trees are created equal.  Trees in several inches or a foot or two of water will most likely only hold baitfish, if anything.  Walleye trees should be suspended over deeper water, creating canopy cover.  Canopy cover throughout the lake is sparse in the spring, because weeds aren’t fully developed; therefore, fish congregate under the tree canopies to hide and more effectively ambush their prey.  After a few more casts around the tree Tyler felt that all too familiar tug of a walleye on the end of his line! A beautiful 19” walleye!  We fished out the trees on the shoreline and both caught a couple of nice, solid ‘eyes.  The walleyes were picked up casting shallow on the tree trunk and bringing the lures out and deeper, generally picking up fish around the first break in 5-6 FOW.

We were both pleased with the action of the lures and by the fact that we caught fish; knowing fish will hit a new lure under the conditions you are currently fishing in is HUGE.  This shifted our moods upward and began building confidence in these new baits.  But we didn’t have enough for an episode yet so we decided our next spot needed to be adjacent to main lake in hopes of finding slightly lower water temps.

As we approached our next spot Tyler switched over to the side imaging screen of our Humminbird Helix to scan the structure and look for fish.  Remember, always fish up to your structure, if you come in too fast or go too far you will spook the fish using that structure and your day could go from phenomenal to zero in a hurry.  The boat was positioned in 19-20 FOW, but the side imagining scans out 80 feet enabling us to see fish positioned in 12 FOW, slightly off the peak of the rock spine.  We approached on the wind-blown side, electronic anchoring as we moved in to fan cast the entire length of the spine thoroughly and it did not take long for the fish to show interest!  The walleyes could not resist the Rumble Shiner.  We were catching walleyes on doubles and back-to-back casts.

Because of how the rock spine lies, boat positioning and wind direction we made casts both into the wind and with the wind at our backs. And for anyone who has made casts into the wind with a bait caster you know the importance of castability, which corresponds with line, reel and rod.  Because if those combinations are off, you will land in backlash city way more than you want.  For this particular day we were using 8 lb mono line on 7-foot medium power, moderate action Kraemer Custom Rods. This combo proved successful and enhanced the castability for the Rumble Shiner, making further casts than I have been used to with these types of baits.

We caught fish consistently right up until it was time to head in.  We landed 20” – 26” fish, filmed an episode, and earned ourselves a new favorite jerk bait.  The slashing and twitching movement of the Rumble Shiner compared favorably to our other preferred twitch baits while the castability and durability was improved in comparison with the plastic molded baits we had used in the past.  And after viewing our underwater camera footage and seeing how many fish followed without striking and fish that missed, we grinned and giggled like school girls over the possibilities of the next time we are out with the Rumble Shiner.

After a rough start and wondering if we (and the bait) could get the job done the day turned out pretty close to perfect and the Rumble Shiner came through for us in a HUGE way! We caught a ton of fish, had a great day on the water and added a new bait to the arsenal.  You can watch our adventure on Fox Sports North Saturdays at 11:30 a.m. or on the Pursuit Channel during various airings, or on our YouTube channel after March 14th!

If you are a walleye angler, Northland’s Rumble Shiner should have a place in your tackle box.  These baits are slender bodied, balsa wood baits that run 5-7 feet deep for trolling or casting. Each bait is handmade through a heat compression molding process and will be available in early March 2021 with 15 colors and at least 2 sizes.