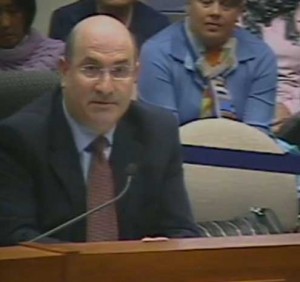 THUNDER BAY – Thunder Bay City Manager Tim Commisso reported on the plans for the city to invest in infrastructure. The first report will be followed by an additional report to Council at the end of October.

Commisso reported that the current council has been very focused on upgrading and improving infrastructure.

Council was told that from 2010 to 2013 under the “Pay as you Go” investment in Infrastructure has grown from $10 million to $20 million annually.

The impact on taxes is projected to be within 3% each year.

The Municipal Infrastructure increases will address the shortfalls from past councils where funding into infrastructure was pushed off into the future, leaving roads in need of repairs.

The focus will be on pavement rehabilitation, road network improvements, bridges and culverts, streetlights, and sidewalks.

The goal of the project will be to present options for an additional tax supported debt, that will be approved by Council.

The Renew Thunder Bay Reserve Fund has been growing, Council was told, with added funding from Tbaytel Performance Dividends and the Thunder Bay Hydro Renewable Energy. The estimated addition would be $5 annually.

In the 2014 Budget, the plan also include the creation of a Budget Officer.

“We have to be responsible,” Commisso stated, “That is what municipalities do”.

“This Council can only make decisions, up to 2014 budgeting,” added Commisso. “Decisions after that will be made by the new Council”.