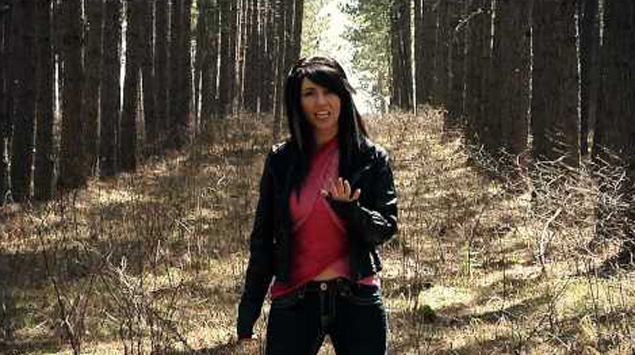 THUNDER BAY – “Together we can change this world”. That is the theme in Shy-Anne Hovorka’s song, and video “Change this world”.  “The video represents many things out of the medwewin”, shares Hovorka. The Medwewin is the Aboriginal circle with the 4 colors. “Each color represents many things, and throughout the video I tried to illuminate aspects of it,” continued Hovorka.

“One of the things the colors represent are four races; African, Aboriginal, European and Asian. I made sure that all races are present in the video. Another thing it represents is the mental, physical, emotional and spiritual”.

“The little girl, Brooke Rajala, shows the emotional and physical needs it takes to make a difference in the world. Mayor Lynn Peterson represents the mental / intellectual needed, and Elder Dave Couchene represents the spiritual”.

“They all come together at the end, bringing to us another four elements needed for balance and change”.

The video contrasts some of the problems in society, with suicide, drugs, racism, and poverty, with the hope and reality that assures you that we really can change the world.

Hovorka shares, “There is still more. There is the circle of life too. The video starts with the child and ends with the Elder, thus showing the progression of life. When all of these things come together at the end of the video, along with the help of many others, then change is possible. This is when Brooke gets the world back. Now changes can happen, because balance in life is there, and others have joined”.

The lyrics for “Change the World” flowed easily for Hovorka. “The song was written in about ten minutes,” said Hovorka.

“When writing the song with my guitar player, Jordan Elcheson, we thought about the various things that are affecting people around us, in particular the Aboriginal population. We were really hoping to use our gifts to make a difference in the world. My gift is music, so hence the song”.

“Our goal as a group is to try and change the world with whatever skills we have,” concludes Hovorka.

Aldo Ruberto, a Thunder Bay City Councillor states, “Shy Anne is an excellent ambassador and role model for the citizens of Thunder Bay. Talented, caring and extremely hard working. She gives all she can of herself to help others especially the young people. Wish we had more people like her”.

On Youtube, the “Change the World” video has reached over 20,000 views. It is a powerful combination of image and music that makes you think, and yet feel that if you try, that we really can change the world.

Win, lose or draw, one thing is certain, Shy-Anne Hovorka is showing how with hard work, determination and a positive outlook that you certainly can change the world.