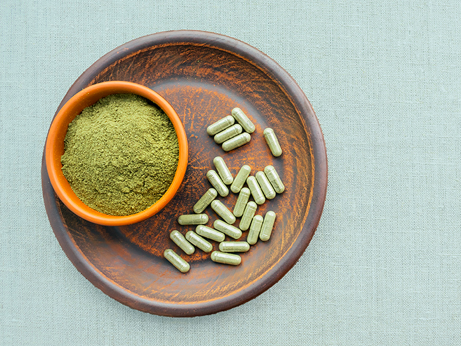 The record of Kratom arriving in Europe and the US is quite old. The credit for its discovery of chemical properties goes to the Dutch Botanist Pieter Korthals. He divulged all its beneficial uses after carrying out thorough researches.

Used by people of indigenous people of Myanmar, Thailand, Indonesia, Malaysia and Papua New Guinea for centuries together, Green Vein Kratom is a herbal product that people can use to relax their minds.

In 1836, Kratom was getting used in Malaysia and Thailand as an alternative to opium. Kratom’s botanical name used in pharmacopoeia is Mitragyna Speciocosa.

Green Vein Kratom is getting used in different parts of the world, including the USA, Europe and Asia. The Las Vegas-based Golden Monk is a reputed and trusted retailer of Kratom products from powders to capsules. In Asia, however, it is getting used for hundreds of years.

Golden Monk offers several Kratom veins and strains, including Red Vein, White Vein, Green Vein, and Maeng Da Kratom strains. Anyone above the age of 18 can directly buy from Golden Monk store or order online to get it by mail order.

Golden Monk Kraton products are all approved by the American Kratom Association. Golden Monk sources Kratom from Indonesia where it grows best. All the Kratom products sold by Golden Monk undergo different tests and chemical examinations at its sophisticated and well-equipped laboratory.

The history of scientific examination of Kratom began way back in 1839 when well-known Botanist Pieter Korthals, a scientist from the Netherlands, first described it detailing its chemical composition, medicinal properties, intoxicating effects and other health-related values.

Thus, Europe knows it for well over 150 years. In other words, Europe came to know about Kratom’s use by the indigenous Asian people and also its application for various socio-cultural functions.

Kratom Is Extracted from a Wonder Plant

Kraton is somewhat akin to cocoa, coffee and Khat, a stimulant in nature. The leaves of its plant are useful for various purposes in Asiatic nations, including Malaysia and Thailand. Often, juice of the plant or leaves was used as a part of religious rituals. In Thailand, Kraton is also used to entertain guests.

People engaged in long working hours with limited breaks and monotonous jobs can use Kraton to freshen-up themselves.

Just as it was used centuries ago in Asia and Papua & New Guinea as a natural opioid, its use now has extended to the US, Europe and other parts of the world. It is plant-based and not synthetic at all. The plant is an evergreen one.

Kratom sold in the US must pass the stages of examination by the American Kratom Association GMP Program. All Kratom powders and capsules must pass its standards before being sold in the market.

A Review of the Kratom Crazy Mitragyna Speciosa Brand

4 things you should know about using kratom

5 Reasons to add kratom to your life