The initial officer on the scene went with an offensive transitional attack, which knocked down the fire so another crew could make entry into the basement where the fire had originated and completed putting out the fire.

Fortunately, Russak reports, all of the people in the home were alerted to the fire by their smoke alarms and had evacuated the home. 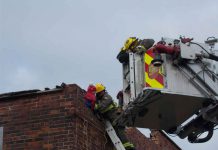