THUNDER BAY – NEWS – Ontario’s Special Investigations Unit says that two Thunder Bay Police Service Officers have no criminal responsibility in the death of a man following his arrest by police.

In a media release today, the SIU says on February 28, 2020, a 29-year-old man was admitted to hospital following his arrest by Thunder Bay Police Service officers. The following morning, he fell into acute medical distress.

“Two of the officers who had custody of the man in the hospital when he was rushed to the Intensive Care Unit were identified as the subject officers for purposes of the SIU investigation”.

The Director of the Special Investigations Unit, Joseph Martino, has determined there are no reasonable grounds to believe that the officers committed a criminal offense in connection with the man’s death. 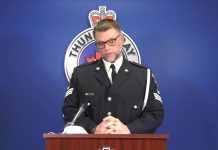