Swedish activist Greta Thunberg is an inspiration for Samela Sateré-Mawe, but more so are her roots in Amazon indigenous culture

MANAUS, Brazil (Reuters) – Samela Sateré-Mawé, a 24-year-old biology student, has one guiding belief – if the rainforest dies so will her Amazon tribe.

“Indigenous people are an extension of nature, and nature is an extension of us,” said the environmental activist, who joined Greta Thunberg’s Fridays for Future movement to save the forest.

Environmental activism, she told Reuters, is just a new name for what the Sateré-Mawé have been doing for centuries.

Samela posts videos on social media and takes part in Fridays for Future when she is not studying or making anti-COVID face masks in a craft workshop with other indigenous women in a Manaus suburb.

Scientists say the Amazon, the world’s largest rainforest, absorbs vast amounts of carbon dioxide and its preservation is vital to curbing climate change.

Swedish activist Thunberg is an inspiration for her, but more so are her roots in Amazon indigenous culture from where she derives her concern for the environment and the rainforest, which is threatened by illegal loggers, encroaching farmland and wildcat miners.

Her people’s name comes from Sateré meaning “lizard of fire” in their Tupi language – in reference to a dominant clan within the tribe – and Mawé, meaning smart and curious parrot.

The Sateré-Mawé are forest people whose ancestral homelands were by the headwaters of tributaries of the Amazon. Their first contact with Europeans was with Jesuit missionaries in the middle of the 17th century.

Encroachment on the forests and illness brought by outsiders has driven hundreds of the 13,350 Sateré-Mawé to move to urban areas, as Samela’s parents did before she was born.

Today, their main source of livelihood is the caffeine-filled seed of the Guaraná fruit that grows on a vine in the forest and is ground into a powder used for energy drinks and as a dietary supplement.

Samela says the forest is under threat from the government of far-right President Jair Bolsonaro who has eased environmental controls and plans to develop the Amazon economically. This has encouraged illegal gold miners and loggers to invade indigenous reservations.

This year, fires mainly started to clear land for cattle and farming in the dry season increased to a 10-year high in August, according to government satellite data.

In a remote address to the United Nations General Assembly last month, Bolsonaro rebutted international criticism of his environmental policies and said the fires were started by indigenous people, who do use fire to clear patches of land to grow food.

His comments outraged Samela, who believes indigenous people are the best guardians of the forest because they depend on its biodiversity to survive and are not motivated by greed driving environmental destruction.

“The fires make me very sad, because we are losing so much territory … If the forest goes, we will die,” she said.

(Reporting by Bruno Kelly in Manaus and Gabriel Araujo in Sao Paulo; Writing by Anthony Boadle; Editing by Janet Lawrence) 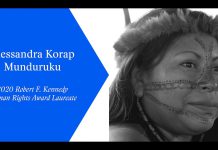