THUNDER BAY – CRIME – Two males, one from Toronto and the other from Thunder Bay are in custody at the Thunder Bay District jail following their arrest on Tuesday, October 7, 2020.

Yonis Abdullahi OSMAN, 24, of Toronto, is charged with Possession of Cocaine for the Purpose of Trafficking, Possession of Property Obtained by Crime Under $5,000, and Failure to Comply with Judicial Release x 2.

Andrew David James START, 29, of Thunder Bay, is charged with Possession of Cocaine for the Purpose of Trafficking, and Possession of Property Obtained by Crime Under $5,000.

The Thunder Bay Police Service Intelligence Unit, with assistance from the OPP and the TBPS’s Community Oriented Response (COR) Unit, executed a search warrant at a residential address in the 200 block of Pearl Street just after 3 pm EDT on Tuesday, October 7, 2020.

The warrant was a result of an ongoing investigation into drug-trafficking activity at that address. As a result of the search, two accused persons were identified and arrested without incident.

Following a search of the home police located a quantity of suspected crack cocaine, cash, and paraphernalia consistent with drug trafficking. 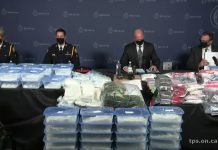