Next year will mark an incredible anniversary in the Thunder Bay area, Chippewa Park’s 100th Anniversary! The Friends of Chippewa Park are holding a 50/50 raffle with a $40,000 maximum prize in support of a 5 day Family Festival. The Festival will run from Thursday evening of July 29th through to Monday, Aug 2nd – the Civic Holiday.

“The community’s support to help The Friends of Chippewa Park raise the funds for its 100th Anniversary Family Festival, will be a good investment,” said Westfort Councillor Kristen Oliver, adding she gets plenty of calls about the park and its current condition. “Five days of free local entertainment will be an exciting addition to next summer’s fare.”

“The family festival that we want are organizing will feature a range of local talent of interest to all ages and demographics.” said Cathy Sawicki, Co-Chair of the 100th Anniversary Planning Committee. “Two stages for performers, buskers, pipe bands, major fireworks display on the shore of Lake Superior, and much more. Join us in creating a memorable event by purchasing one of the 50:50 lottery tickets.”

Tickets can be purchased at a number of retail locations across the City or online at chippewapark.ca. A total of 4,000 tickets are available at a cost of $20 each. 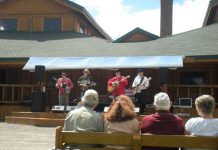 Sundays in the Park Concerts Seeking Musicians for 2019 Season

Future of Chippewa Wildlife Exhibit Up to Public