The Canadian Hurricane Centre will provide an update on Hurricane Teddy on Sunday, September 20, 2020. Warning Preparedness Meteorologist Bob Robichaud will discuss the latest information about the storm.

Hurricane Teddy will likely reach offshore waters south of Nova Scotia on Tuesday as a hurricane, and will then impact Atlantic Canada and the Gulf of St. Lawrence region as a strong post-tropical storm on Tuesday into Wednesday.

Teddy is currently a category three hurricane over the Tropical Atlantic well southeast of Bermuda. It will slowly move up during the next two days, passing east of Bermuda on Monday. This is when it will begin to accelerate towards Nova Scotia. When it reaches Canadian waters south of the Maritimes it will be a category two hurricane, but is expected to be a very dangerous post-tropical storm as it moves through eastern Nova Scotia and southwestern Newfoundland.

On September 18, 2020, NOAA’s National Hurricane Center (NHC) warned that Teddy remains a powerful hurricane over the Central Atlantic Ocean, and large ocean swells are forecast to spread across much of the western Atlantic increasing a rip current threat.

Teddy is moving toward the northwest near 12 mph (19 kph) and this general motion is expected to continue for the next couple of days, followed by a turn to the north by early next week. Maximum sustained winds are near 130 mph (215 kph) with higher gusts. Teddy is a category 4 hurricane on the Saffir-Simpson Hurricane Wind Scale.  Some fluctuations in strength are expected during the next day or so. The estimated minimum central pressure is 947 millibars.

NASA’s Integrated Multi-satellitE Retrievals for GPM or IMERG, which is a NASA satellite rainfall product, estimated on Sept. 18 at 8 a.m. EDT (1200 UTC), Hurricane Teddy was generating as much as 30 mm (1.18 inches) of rain per hour on the western side of its eye. That was the area of where the heaviest rainfall was occurring.

Rainfall throughout most of the rest of the storm was estimated as falling at a rate between 5 and 15 mm (0.2 to 0.6 inches) per hour. At the U.S. Naval Laboratory in Washington, D.C., the IMERG rainfall data was overlaid on infrared imagery from NOAA’s GOES-16 satellite to provide a full extent of the storm.

“Teddy remains a powerful category 4 hurricane with a well-defined eye and intense eyewall,” said John Cangialosi Senior Hurricane Specialist at NHC in Miami, Fla. “There have been occasional dry slots that have eroded some of the convection in the eyewall and rain bands, but these seem to be transient.”

What Does IMERG Do?

This near-real time rainfall estimate comes from the NASA’s IMERG, which combines observations from a fleet of satellites, in near-real time, to provide near-global estimates of precipitation every 30 minutes. By combining NASA precipitation estimates with other data sources, we can gain a greater understanding of major storms that affect our planet.

Instead, what the IMERG does is “morph” high-quality satellite observations along the direction of the steering winds to deliver information about rain at times and places where such satellite overflights did not occur. Information morphing is particularly important over the majority of the world’s surface that lacks ground-radar coverage. Basically, IMERG fills in the blanks between weather observation stations.

The NHC issued key messages for Teddy, including about its forecast track and the ocean swells it is generating.

NHC said Teddy is expected to approach Bermuda as a hurricane this weekend and make its closest approach to the island late Sunday or Monday (Sept. 20 or 21). While the exact details of Teddy’s track and intensity near the island are not yet known, the risk of strong winds, storm surge, and heavy rainfall on Bermuda is increasing.

Large swells produced by Teddy are expected to affect portions of the Leeward Islands, the Greater Antilles, the Bahamas, Bermuda, and the southeastern United States during the next few days. These swells could cause life-threatening surf and rip current conditions.

Hurricanes/tropical cyclones are the most powerful weather events on Earth. NASA’s expertise in space and scientific exploration contributes to essential services provided to the American people by other federal agencies, such as hurricane weather forecasting.

For more than five decades, NASA has used the vantage point of space to understand and explore our home planet, improve lives and safeguard our future. NASA brings together technology, science, and unique global Earth observations to provide societal benefits and strengthen our nation. Advancing knowledge of our home planet contribues directly to America’s leadership in space and scientific exploration. 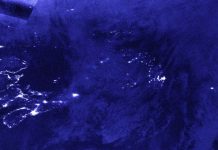