Anishinabek Nation Grand Council Chief Glen Hare is outraged that the charges against Brayden Bushby have been reduced to manslaughter and aggravated assault charges from a second-degree murder charge in the killing of a First Nations woman in 2017.

“This was not an accident or youthful indiscretion, this was an act of intentional violence fueled by hatred,” says Grand Council Chief Glen Hare. “Systemic and overt racism is not the only problem; racism is much more insidious— showing up in weak and sloppy investigations. The ink of The Final Report of the National Inquiry into Missing and Murdered Indigenous Women and Girls is not even dry. Must we wait until enough Indigenous people have reached a place of privilege in Canadian society for justice to be served? We have been patiently waiting for systemic change for far too long. Enough is enough. I am unceasingly demanding that the Prime Minister of Canada along with the Premiers in every Province act decisively.”

“This represents a failure of the entire justice system, the police investigation, the Crown Attorney, prosecution policy, the courts, and legislative parameters that these individuals and systems follow. They are not designed with First Nation people in mind and continue to fail our people. Systemic racism is rampant in all of our institutions and systems and these senseless killings and injustices are a reminder of that,” says Anishinabek Nation Grand Council Chief Glen Hare. “We weren’t considered real people until 1951, and our women considered even less than that. In many ways, nothing has changed. The Canadian justice system does not see Indigenous women as someone’s daughter, mother, wife, sister, and barely as a victim of a crime. The recently announced reduction of charges against the alleged perpetrator in the murder of Indigenous woman Barbara Kentner in Thunder Bay by an intentional act of violence is yet another frustrating development in this tragic history of the mistreatment of Indigenous women.”

On January 29, 2017, a First Nations woman, Barbara Kentner, was struck in the lower abdomen by a trailer hitch thrown from a moving vehicle while she and her sister were walking in a residential neighbourhood in Thunder Bay. The assailant was heard yelling from the vehicle, “Oh, I got one”, after throwing the hitch at the sisters.

Many community members and the Kentner family have wondered why the other three passengers in the vehicle that night were not charged after a statement was made, “Oh, I got one”.  Charges could have been accessory to murder, accessory to an assault, or even conspiracy.

In a city already divided, with relationships between the Thunder Bay Police Service and the Indigenous community, this case has widened that divide.

Following surgery and extensive medical care and despite her tremendous efforts, she did not recover from her injuries and died on July 4, 2017. After her death, the charges were upgraded to second-degree murder; however, it was recently downgraded to a charge of manslaughter, and the second charge of aggravated assault. A trial is set to begin on October 13 and is projected to last four days.

The family of Barbara Kentner says that they didn’t know the charges were being downgraded. They found out after the decision was made.

This tragic incident is one example of many that is not uncommon for Indigenous people in the Thunder Bay area and Indigenous people throughout the province to experience. Violent crimes accompanied by racial slurs or implications are considered hate crimes. The leniencies and inadequacies in charges laid in the justice system in respo­­nse to violence against Indigenous women and girls are linked to The Final Report of the National Inquiry into Missing and Murdered Indigenous Women and Girls’ Calls for Justice on tougher sentencing and harmful institutional-based policies and practices. 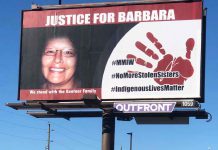