THUNDER BAY – Thunder Bay Police Service officers were dispatched to a residential address in the 200 block of Finlayson Street at about 3:30 am EDT on Wednesday, September 16, 2020, following reports of a male with a gun entering a home.

When the police arrived they located multiple individuals inside the home, including a male who was attempting to hide from officers.

An investigation found that a Conductive Energy Weapon was located where the male was hiding.

A CED is a less-lethal weapon system designed to temporarily incapacitate a subject through the use of an electrical current which temporarily interferes with the body’s neuromuscular system and produces a sensation of intense pain.

The male accused was arrested after a brief struggle.

Jody Michael James DULIAN is charged with Possession of a Weapon for Dangerous Purpose, Possession of Firearm Contrary to Prohibition Order, and Obstructing a Peace Officer.

He appeared in bail court on Wednesday, September 16, 2020, and was remanded into custody with a future appearance date. 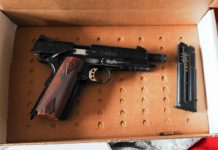