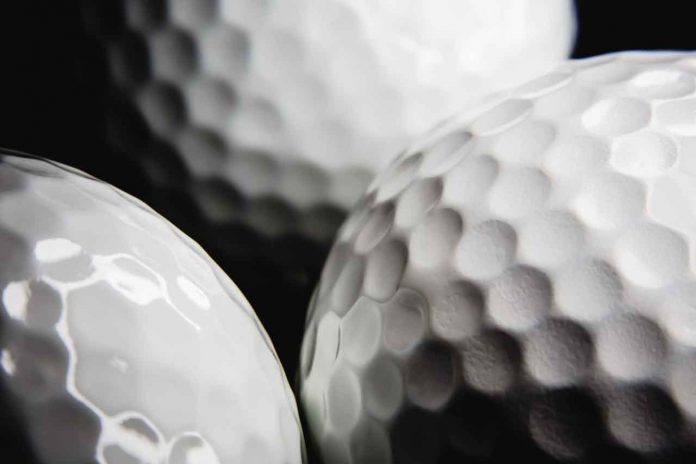 CALEDON, Ontario — Four players—Andrew J. Funk, Brendan Leonard, Canada Life Series Points Standings leader Yi Cao and Albert Pistorius—are jammed at the top of the leaderboard with one round left in the Canada Life Series tournament at TPC Toronto at Osprey Valley’s Heathlands Course. Lest you think the winner will come from that group, a bevy of other players are within shouting distance and will have plenty to say who lifts the trophy Friday afternoon.

Amateur Garrett Rank is only a stroke back, while the trio of Aaron Crawford, David Byrne and JJ Regan are two behind. Friday is shaping up as a battle as the Series completes its third of four tournaments.

Leonard wasn’t doing much with his round when he got things revved up.

“I made a nice eagle on No. 1. I had 217 (yards) to the pin and hit 5-iron, and I was right on it,” Leonard said of his quick start to his back nine that gave a jolt to his day. “I was 1-over going into that, so it flipped pretty quickly once I eagled there, and I hit it pretty close on the next.” Leonard followed that 3-under streak with another birdie at his 15th hole before closing with a disappointing bogey at the par-5 ninth, his 18th hole that, in retrospect, would have given him the outright lead. There’s nothing to hang his head about, though. The par-5 played .231 strokes over par Thursday as the wind continued to wreak havoc on players’ strategy.

“It’s just staying patient, and that’s all I did out there,” Leonard added.

Cao, winner of the previous event at Bear Mountain and the first-round leader, found the going a bit more treacherous during his second tour of the Heathlands Course. Cao could never get out of neutral, playing the front nine in 1-under and the back nine in 1-over, with consecutive bogeys at Nos. 13 and 14 before he parred out. Like every other player, the British Columbia resident who is a native of China battled the wind.

“I think the most important thing about the wind out here is just how wide open it is, especially on the greens. The tee shots don’t bother me as much, but it makes the greens pretty tough to read. I was struggling a little bit on the greens.”

Even tied for the lead, Cao smiled at the prospect of going for two wins in a row.

“I just love playing out here, and I love the position that I’m in [Friday],” he added.

Rank is also more than satisfied with his position with 18 holes to play. “I got off to a nice start. The wind was kind of down for the first five or six holes. I hit some nice shots and made some nice putts,” Rank explained. “I didn’t finish as strong as I would have liked, but I’m in a good spot.”

Did you know Albert Pistorius’ low Mackenzie Tour score in 2019 was 65, something he did in the opening round of the HFX Open in Halifax, Nova Scotia? Pistorius also shot 67 five times, his third-round effort at the Osprey Valley Open at TPC Toronto and another third-round 67 at the ATB Financial Classic, in his hometown of Calgary, leading to a pair of ties for 23rd, his best finishes of the season.

“My tee shots have been really good. I basically hit all the fairways, except when I lost my focus a bit on No. 6. The weather looks pretty calm [Friday]. I think I can go out and shoot a low score.” –Yi Cao

“This morning, we didn’t have a lot of wind, which was great just to get the round started. I hit a lot of good shots into the greens and was pretty accurate with that. I rolled in a few putts when I needed to, and that just kept the momentum going. It was nice to finish with two birdies coming in.” –Albert Pistorius

“It was solid from the start. I started with a nice birdie and just kept the momentum going. There were a lot of good irons shots—a lot better than [Wednesday].” –Albert Pistorius

“I was down in the States trying to play some Monday qualifiers for the Korn Ferry Tour. When there wasn’t anything on the schedule for the summer, this ended up fitting in really nicely. I think it’s a good incentive that the points leader can get into the RBC Canadian Open and earn Mackenzie Tour status. It’s a nice goal to go for.” –Albert Pistorius

“Just to have this opportunity, I can’t say thanks enough for putting these events on. In times like this, for us to be able to compete is just awesome. We had so much time off, and in these times it’s so uncertain.” –Albert Pistorius

“I think I’ve got enough experience just to try and go out there and win. I don’t focus too much on winning, I want to stay in the process and try not to get too involved with the outcome.”  –Albert Pistorius

“I’m just trying to keep playing and grinding and taking it shot by shot. It’s blowing like crazy out here, so you’re just trying to make sure you hit it below the pin and make a couple putts.” –Brendan Leonard

“It’s nice to play out here. The course is perfect. I can’t give enough praise for how good the greens are out here. It’s good to just keep playing, and I’m so grateful that we’re allowed to do this. I just thought, Let’s come out and take advantage of it.” –Brendan Leonard

”The course is in fantastic shape, and it’s playing really tough. I tried to keep it in front of me, take it one shot at a time and to not let the wind bother me too much.” –Brendan Leonard

“On 17 I hit an awful lag putt. I hit it to 45 feet and must have left myself 15. I’ve only had, I think, three bogeys all week, and two of them were three-putts, so it was nice to save some momentum there.” –Andrew J. Funk on his par save

“The greens are perfect. I just like the way the holes are shaped. You get a lot of crosswind out here, and there aren’t a lot of holes that run down or into the wind. You’ve got to be very creative with picking your lines, and I never like to aim straight down the middle anyway, so this fits my eye a lot.” –Andrew J. Funk

“My driver was just about everywhere today, but it can be forgiving out here if you miss it in the right places. I also play on bentgrass at home in Calgary, and the putts just seemed to be rolling in. The putter was hot today.” –Aaron Crawford

“To have somewhere to play this year is really big for all of us. It’s great to have the opportunity to compete against some really good players and see where it takes us next year.” –Aaron Crawford

“When you watch the PGA TOUR on TV, you don’t ever see them hit a bad shot. Being around them as a caddie and also playing in the 3M Open, you realize that even they are human. It takes a little pressure off to know that you don’t have to be perfect.” –Aaron Crawford on his experience serving as Martin Laird’s caddie and playing on the PGA TOUR earlier this season

“Playing the 3M Open was a great experience. It taught me that I need to patient and trust my own game, knowing that there are many ways to get to the same destination.” –Aaron Crawford

“This is a great opportunity just being able to get out and enjoy some competition. It’s obviously weird times in the world right now. Thanks to Canada Life and thanks to the Mackenzie Tour for stepping up and allowing us to come out here and safely compete.” –Garrett Rank

“It’s easy to go out to your home course and shoot a good score, but just getting under the gun and feeling the heat and the pressure of having to hit a shot when you need to is very important. You learn different things, like this week needing to hit a few shots a little lower into the wind.” –Garrett Rank

“I was gearing to go back to the NHL Bubble and the playoffs and unfortunately wasn’t picked (to work), so it was a quick switch in the brain back to golf and trying to prepare for this. I’ve been playing a bunch and playing decent around my home track, and it’s nice to get out and finally post a score on the board and have it matter.” –Garrett Rank

Second-Round Weather: Overcast and warm, with showers after the round ended. High of 27. Wind SW at 22-27 kph.