THUNDER BAY – There are 29 active fires across the region. Eleven of those wildfires are out of control. Two fires are causing issues, Red Lake #49 and Nipigon 45. Three new fires were confirmed in the Northwest Region by the late afternoon of Aug. 13.

Possible high levels of air pollution due to smoke from forest fires are expected tonight and Friday. Smoke plumes moving over northern Ontario from forest fires near Red Lake and Fort Hope will likely affect nearby regions. Air quality may deteriorate if the smoke descends to ground level.

Air quality may improve somewhat Friday and Saturday near Red Lake due to expected rainfall tonight and Friday night.

Faced with challenging conditions, firefighters on both the ground and in the air kept the fire from increasing in size on August 12, 2020.

Nipigon 45
Nipigon 45 is of concern to the community of Eabametoong (Fort Hope) which lies 33 kilometres to the east. While not directly threatening the community, the fire is creating significant volumes of smoke that have resulted in air quality issues for the remote First Nation. 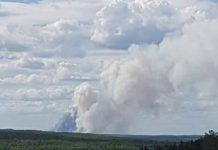