THUNDER BAY – NEWS – The City of Thunder Bay is looking for a new Fire Chief.

Today the COTB announced that Greg Hankkio has been extended as Acting Fire Chief until September and that information about recruitment for the Fire Chief position will be released soon.

Mr. Gale has provided no comment on the circumstances of former Chief Hay’s departure. Today’s media release from the city states, “No further comment will be provided beyond this written statement”. 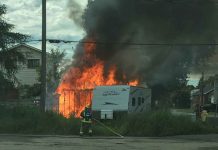