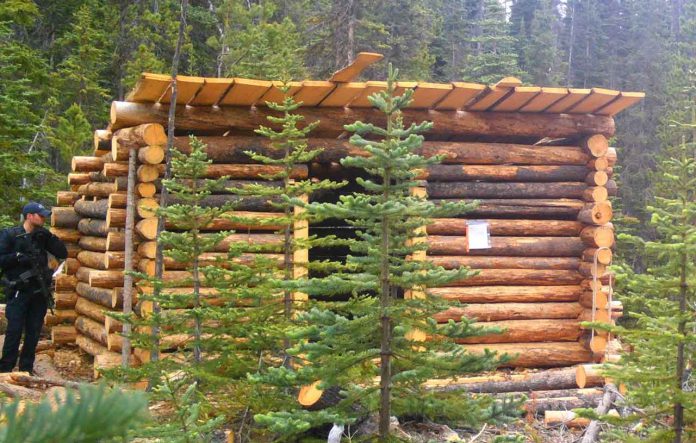 The smokehouse belongs to the Cas Yikh people and is critically located at the headwaters of the Wedzin Kwa river to harvest fish and feed Wet’suwet’en families. Food fishing is an inalienable and protected Aboriginal right. Food fishing has also been declared essential in BC during the COVID19 pandemic. Wet’suwet’en people must be able to exercise this right without fear of police intimidation or violence.

Since January of 2019, RCMP has conducted several large scale, militarized assaults on Wet’suwet’en territory and made dozens of arrests of Wet’suwet’en people, Hereditary Chiefs, and our supporters. RCMP continuously surveil our Wet’suwet’en home sites and continue to occupy a remote police detachment on Gisday’wa territory in stark violation of our Chiefs’ wishes. We are unable to visit our territories with our elders and families, to hunt, or to harvest our foods and medicines without the threat of police violence.

We are deeply concerned with excessively armed police conducting foot patrols through remote parts of Gidimt’en yintah which are subject to active cultural use. We have seen too frequently, on our own territories and across Canada, that police readily use lethal force against our people and seldom face any consequence.

Hereditary Chief Woos expresses his concern for his clan members and guests on his territory and states, “if we are to communicate effectively with respect, all levels of this project need to show respect and understand our culture, using a police force who show automatic rifles is concerning…”

Images from June 10 and 18 show three RCMP members patrolling the smokehouse, including one with a fully automatic assault rifle, followed shortly after by a group of Coastal Gaslink workers. Coastal Gaslink has not obtained free, prior, and informed consent to undertake any work on Wet’suwet’en territory, and do not currently have all the permits required to do work in this area.

On January 4, Wet’suwet’en Hereditary Chiefs representing all five clans of our nation collectively evicted Coastal Gaslink from our territories. While the eviction is still in effect, Coastal Gaslink continues to trespass on our lands with RCMP acting as an auxiliary private security force.

The Wet’suwet’en Hereditary Chiefs, joined by the United Nations’ Committee for the Elimination of Racial Discrimination, have repeatedly called upon the RCMP to withdraw from Wet’suwet’en territories, to prohibit the use of force and lethal weapons, and to cease the forced evictions of Wet’suwet’en people from our unceded homelands.

We are seeing examples all across North America of systemic racism and violence perpetrated by the police. Here we see just one more example against Indigenous people living a cultural and traditional lifestyle being targeted with assault rifles. We call on all parties involved in this campaign against the Wet’suwet’en people to stand down.

OPEN LETTER: Racial Attacks on Mi’kmaq Lobster Fishers Most Recent Example that Canada and the Honour of the Crown is Failing First Nations –...