Hard-hitting action is the name of the game when UFC fighters like Blaydes and Volkov get into it on Sunday, June 21, at 9 PM EDT. The #3 ranked contender, Curtis Blaydes goes up against the #7 challenger, Alexander Volkov. As the Main Card at 9 PM, this UFC contest will be watched by tens of thousands of adoring MMA fans across the US, and beyond.

Fight fans will be able to follow the action, play-by-play with top MMA odds at leading online bookmaker, 888sport New Jersey. UFC Fight Night will feature the #3 Curtis ‘Razor’ Blaydes with a career record of 13-2-0. He has a striking accuracy of 51% with 328 strikes landed from 640 strikes attempted. His grappling accuracy is at 57%, with 33 takedowns landed from 70 takedowns attempted. His last 3 event results read as follows:

This Dutch-style MMA/UFC fighter hails from Naperville. He has a height of 76 inches, a weight of 265, and a reach of 80. He is certainly in contention to make a big splash when he goes up against his opponent, Alexander Volkov on Sunday, June 21 at 9 PM EDT.

Who is Alexandra Volkov?

Alexander ‘Drago’ Volkov is a #7 ranked heavyweight contender. He has a fight record of 31 wins, 7 losses, and 0 draws in his career. Volkov has managed 20 wins by KO, 3 by submission, and 7 by decision. His accuracy is surprisingly high, with 60% striking accuracy, comprised of 471 strikes that landed from 780 strikes attempted. His grappling accuracy of 75% is made up of 5 takedowns landed from 8 takedowns attempted. Over the course of his last 3 UFC fights, he has won all 2 events:

Alexander Volkov hails from Moscow, Russia, and trains at the Global Fight Gym. At a height of 79 and a weight of 250, this heavyweight contender is looking to add to his 31 wins to make it 32-7-0 when he meets Curtis ‘Razor’ Blaydes in the cage.

Betting odds have yet to be finalized for this heavyweight bout. Fight fans will be eager to cash in with unbeatable odds from the leading online bookmakers in New Jersey. Betting aficionados have Blaydes as the clear favourite, with odds of around -235, compared to Alexander Volckov at +200. While these are subject to change closer to the time, it’s clear that the overwhelming advantage is with the #3 ranked contender, Curtis ‘Razor’ Blaydes.

For those uninitiated in sports betting, a (-) alongside the betting odds indicates how much money needs to be put down in order to win $100. No doubt Blayde is a champ in the making, with incredible power, agility, and blunt force trauma. For fans of Volkov, it’s clear that he can go the distance. If Blaydes doesn’t take him out early – it’s game on! 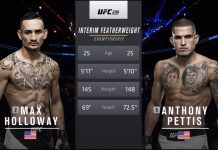