New team challenge will culminate in welcoming fans back to events in Sioux Falls, South Dakota for championship weekend

PUEBLO, Colo. – Ahead of the newly-launched PBR (Professional Bull Riders) Monster Energy Team Challenge, presented by U.S. Border Patrol, the league has announced the rosters and competition schedules for the six teams set to compete in Division A of the new tournament.

The PBR Monster Energy Team Challenge will feature 48 of the world’s top professional bull riders split into 12 teams and two divisions, facing off throughout June at the Pendleton Whisky Let ‘Er Buck Saloon at South Point Arena in Las Vegas, Nevada until two teams remain to compete for the championship in Sioux Falls, South Dakota, in front of a live arena crowd.

Each of the 12 competing teams will be comprised of three active riders, one of whom is the Captain, an alternate, and a supervisory General Manager.

During the May 17 PBR Unleash The Beast event in Logan County, Oklahoma, the Captains, chosen by PBR, each formed their respective teams, selecting from any rider in good standing with the league.

The General Manager will be responsible for architecting the rider lineup for each game.

On the Wednesday prior to each weekend of play, the General Manager will set his starting lineup for each game, selecting which three riders will compete, and who will serve as the alternate. Once the General Manager submits his lineups, he will be unable to change it (outside of rider injury) throughout the weekend’s games. The bulls will be assigned by random draw.

Should any team sustain more than one injury, General Managers will be able to draft an additional rider from the supplementary pool of alternates PBR will have on standby. Those riders will be announced in the coming days.

The teams competing in Division A are:

*Note: Teams are subject to change pending injury and travel regulations during COVID-19. Stay tuned to PBR.com for the latest developments.

Division A will hold its first weekend of competition June 5-7, followed by its final weekend of play June 12-14. Teams to be announced in Division B will compete the weekends of June 19-21 and June 26-28. Each night of televised action on Friday, Saturday and Sunday, will feature three games, with each team competing once per night.

Each game will be comprised of 12 collective outs, with each team attempting six bulls. In each game, three riders per team, as selected by the General Manager, will attempt two bulls each. The winner of each game will be the team with the top combined aggregate score from their six outs.

Through the first five games of divisional play, each team will face off against the other five teams within their division once. For each team’s sixth and final game, the teams within each division will be ranked based on their overall win-loss record with the division’s top-ranked team facing off against the lowest ranked, No. 2. taking on No. 5, and No. 3 playing No. 4. Any ties would be broken by the teams’ overall aggregate score from the first five games.

The schedule of play for Division 1 is:

All games from divisional action from the PBR Monster Energy Team Challenge, presented by U.S. Border Patrol, will be televised on the CBS and CBS Sports Network.

Following the divisional competition, the top three teams from Division A and Division B, as determined by their win-loss record, will advance to the championship in Sioux Falls, SD, at the Denny Sanford PREMIER Center July 10-12 with fans in attendance for all three days of competition. PBR and event partner ASM Global will introduce a series of new fan-safety protocols in the arena for all three days of the championship weekend.

Championship weekend, a single-elimination bracket will feature two wild card matchups on Friday; the No. 2 and No. 3 ranked teams from each division will go head-to-head attempting to advance to the Final Four. Subsequently, the semifinals will be held on Saturday, followed by championship Sunday.

Tickets for the championship weekend of the PBR Monster Energy Team Challenge, presented by U.S. Border Patrol, July 10-12 in Sioux Falls, SD are on sale now for PBR Rewards members. Tickets for the general public go on sale Friday, June 5. Tickets can be purchased on PBR.COM, Ticketmaster.com, and at the KELOLAND box office. Ticket prices start at $15.

PBR’s most recent Unleash The Beast ticketed event for fans was in Little Rock March 6-7, 2020. When restrictions on mass gatherings from COVID-19 (Coronavirus) were put into place, PBR held closed-to-fans events for television in Georgia on March 15-16, and at the Lazy E Arena in Oklahoma on April 25-26, May 9-10 and May 16-17 with a comprehensive safety plan approved by three layers of government.

PBR will announce in the coming days further competition details and rosters for Division B of the PBR Monster Energy Team Challenge, which will not offer individual riders points toward the 2020 world standings.

PBR will handle all production for these events, which are subject to change depending on developments with COVID-19. 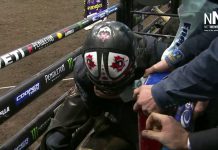 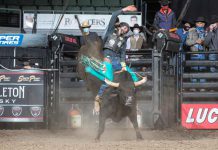