DRYDEN – NEWS – Dryden OPP nabbed a Winnipeg man and have charged him with trafficking in contraband tobacco.

OPP say that on April 29, 2020 at approximately 2:36 PM officers from the Dryden Detachment conducted a routine traffic stop on Highway 17, Wainwright Township (West of Dryden).

As a result of the traffic stop, officers located and seized 54 cases of unmarked cigarettes with an estimated value of $214,000.

Alfred GUENTHER, age 62 of Winnipeg, MB has been charged with the following offence:

The accused was released from custody and will appear in the Dryden Ontario Court of Justice on July 20, 2020. 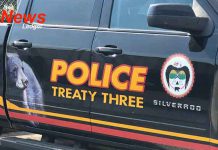