SYDNEY (Reuters) – A powerful tropical cyclone made landfall on the South Pacific island nation of Vanuatu on Monday, witnesses said, levelling buildings in a country already in a state of emergency due to concerns about the coronavirus.

There were no immediate reports of injuries. The cyclone was upgraded to a Category 5 as it approached, the highest category.

“There is lots of damage in Sanma, they lost lots of buildings,” said Jacqueline de Gaillande, CEO of Vanuatu Red Cross, by telephone from the capital Port Vila where the cyclone was expected to hit overnight.

The province of Sanmar sits on the biggest of Vanuatu’s 80 islands and is home to its second-most populous city, Luganville, where photos circulated on social media purported to show buildings flattened by the storm.

“We don’t know if we can provide any supports to the island because we are not allowed to travel inter-island and we are waiting for the government to make that decision,” added de Gaillande, referring to travel restrictions associated with the coronavirus.

Vanuatu has reported no cases of the new coronavirus but has nonetheless declared a state of emergency, banned most international and domestic air travel and limited public gatherings to five people as it tries to prevent a local outbreak of the flu-like illness that has infected nearly 1.3 million people and resulted in about 70,000 deaths globally.

The Pacific region has recorded about 60 confirmed cases of the illness and one death, in Guam, according to media reports.

The Australian Broadcasting Corp reported that Vanuatu officials had relaxed social distancing rules over the weekend because of concern about the cyclone. Vanuatu’s National Disaster Management Office was not immediately available for comment on Monday.

A day earlier, Solomon Islands police said they retrieved five bodies in their search for 27 people who were swept off a ferry by the cyclone as it passed over the country.

The MV Taimareho set sail early on Friday in strong winds with 738 passengers including crew and the captain on board. Police said the missing were believed to have fallen off during heavy seas.

Vanuatu, and the province of Sanma in particular, was hit hard in 2015 by the Category 5 Cyclone Pam that pummelled the capital Port Vila and other islands. 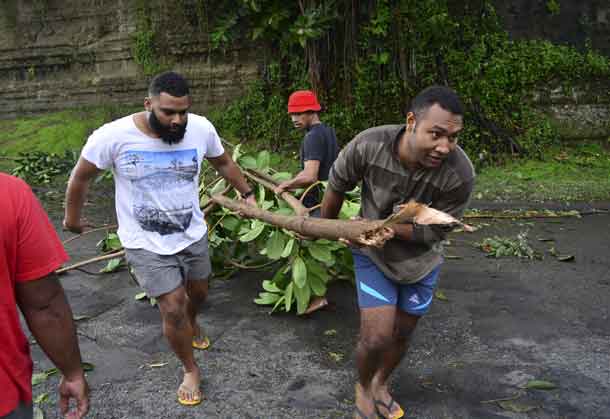