British Prime Minister Boris Johnson has been admitted to the hospital for testing over issues with COVID-19. The Prime Minister tested positive for COVID-19 on March 27, 2020.

According to 10 Downing Street, the Prime Minister’s office, Johnson was taken to a London hospital Sunday evening suffering from what they called persistent symptoms and the Prime Minister is also running a fever.

The decision to go to the hospital is being called a “precautionary step”.

A Downing Street spokeswoman says that “On the advice of his doctor, the prime minister has tonight been admitted to hospital for tests. This is a precautionary step, as the prime minister continues to have persistent symptoms of coronavirus 10 days after testing positive for the virus.”

“The prime minister thanks NHS staff for all of their incredible hard work and urges the public to continue to follow the government’s advice to stay at home, protect the NHS and save lives.”

Prime Minister Johnson will remain in charge of the government, however, it is expected that the British Foreign Secretary will chair a coronavirus meeting scheduled for Monday morning. 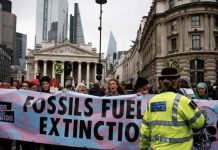