THUNDER BAY – A message of support was sent loud to a crowd that echoed through the Agora at the Lakehead University on Wednesday, February 12, 2020.

The Aboriginal Initiatives students shared a short documentary called, “Invasion”, in Wet’suwet’en Territory where the Royal Canadian Mounted Police violently followed orders of an injunction by the Supreme Court of British Columbia to allow Coastal GasLink Pipeline to begin construction at any cost.

A grandmother, frontline spokeswoman, Freda Hobson, was amongst the ones who were arrested and the court released all who were taken into custody the next day. Freda Hobson has been involved since 1985 when this began, This has grown into an international awareness and the massive support grows everywhere across Turtle Island.

The history, to which the Law of Hereditary Land, unceded territory meaning, No treaty was ever made with Canada and meaningful consultation with Coastal GasLink Pipeline to which the Hereditary Chiefs claim otherwise that never happened.

In their unceded territory, the sacred and water, language and culture to the Wet’su’wet’en, Un’iso’ten and Git’imat Clan people that have continued to live the traditional way of life of their Ancestors continue to say no to the Pipeline.

The students are inviting the public to join them on February 18th, 2020, where there will be an awareness gathering on the corner of Red River Road and Court Street in Solidarity with Wet’suwet’en. 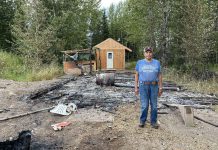