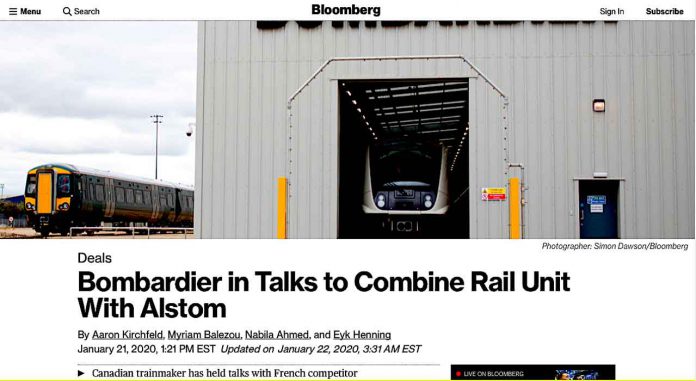 According to Aaron Kirchfeld, Myriam Balezou, Nabila Ahmed and Eyk Henning—writing in the Bloomberg business news online—Bombardier may be schmoozing with Alstom SA of Paris about some sort of rail collaboration.

Close on the announcement by Alstom of the sale of a batch of 27 shiny new blue Coradia iLint hydrogen multiple units (HMUs) for the German State of Hesse, Hydrogenics—the Ontarian maker of the trains’ fuel cells—became part of the industrial giant, Cummins, Inc. (not coincidentally once known as “Cummins Engine Company”).

Per Bloomberg, there is no fait accompli. Consorting among giants is not generally applauded. When Alstom and Siemens sought to tie the knot (the better to challenge top-dog China Railway Rolling-stock Corporation), the EU yelled “antitrust” and nixed the match.

We’ll soon see how that works out. China then bought Germany’s Kiel locomotive maker, Vossloh. China is an old Han at hydrail. Even before Alstom, China opened the world’s first hydrail plant in Qingdao, followed soon by a second in Tangshan. With France and other EU members committed to replacing all diesel in just 15 years or so, the Central Kingdom’s Teutonic move may pay off handsomely.

Last I heard it remains to be seen whether Alstom can play Ghost of Christmas Future to Bombardier’s Scrooge and wake the company to a happy hydrail redemption. The folks at Bombardier were first visited by then-Premier Dalton McGuinty in 2007 and were not persuaded. Next, in 2008, they were quietly beckoned toward the City of Light when the Union Internationale des Chemins de Fer in Paris was looking for a proof-of-concept vendor during its prescient Hyrail exploration.

Bombardier may be pardoned for missing that chance. Still today there are many who don’t see why wireless hydrail railway electrification should be peddled when good old fashioned 1880s Ukrainian-Russo-German overhead wire technology still finds buyers at $10M extra per mile.

Scrooge got a third shot at redemption and seized it. Here’s hoping for the sake of patient Thunder Bay that Alstom SA of Paris can lure Bombardier away from the Dark Side this time…and that the international minions of administrivia won’t derail this third opportunity. 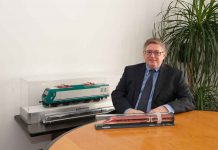