Protecting the Amazon, the world’s largest tropical rain forest is considered vital for slowing global climate change because of the vast amounts of planet-warming carbon dioxide it absorbs.

The more than $7 million on offer to Colombia’s Amazon indigenous tribes is part of hundreds of millions of dollars provided by Norway, Germany, and Britain to a United Nations-backed anti-deforestation effort called REDD+ that provides funds to countries for lowering greenhouse gas emissions.

“For this government, indigenous communities are fundamental in the construction, definition, and implementation of specific policies and actions that guarantee the conservation of their cultural and environmental values,” said Lozano.

“That is why we value their knowledge and wisdom,” he said.

Colombia’s vast southern Amazon region is home to about 800,000 people, including more than five dozen indigenous cultures who live in 183 self-governing reserves.

Including indigenous and forest communities in plans to protect the land is seen as key to stem deforestation.

In Colombia, the deforestation rate fell by 10% from 2017 to 2018, and indigenous reserves had lower rates of deforestation compared with areas not under the same protection, Lozano said.

To fight deforestation, indigenous groups are being asked to submit projects that strengthen traditional ways of life, native languages and medicine, make sure communities can produce enough food and empower women.

“We need to preserve our ancestral knowledge and strengthen our communities and ways of governance,” said Mateo Estrada, a leader of the Amazon Siriano tribe.

“We need to recover the seeds and crops we once cultivated, ensure that our native languages are taught in our schools and train our young leaders,” he told the Thomson Reuters Foundation.

Estrada said the biggest risks his tribe faced were illegal gold and cobalt mining and the use of mercury in mining that kills fish and pollutes rivers.

Deforestation in Brazil, home to the biggest share of the Amazon, rose to its highest rate in over a decade this past year, while rainforest fires nearly doubled in 2019 compared with 2018 under the administration of Brazilian President Jair Bolsonaro.

Under REDD+, Amazon tribes also were being encouraged to submit projects that promote traditional and sustainable farming methods, especially those that can unify farmers, cattle ranchers, and Afro-Colombian communities.

“There are many different languages in the Amazon so it’s not easy to communicate with one another,” said indigenous leader Wilter Rodriguez.

Under the REDD+ program, indigenous groups in Colombia’s Amazon have received about $10 million since 2017. 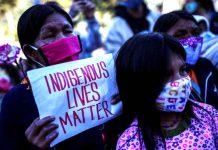