Home Business RCAF Hercules to Arrive in YQT with Toys for the North!

THUNDER BAY – A sure sign of Christmas is arriving in Thunder Bay and then headed north.

Once again this December, the RCMP, Gardewine and North Star Air will deliver toys to remote First Nations communities this Christmas! More than twelve skids of donated new toys, basic needs items and more will be arriving in Thunder Bay via CAF military aircraft CC130 Hercules this Friday at 10:00 am. “We’re all praying for good weather on the leg to Thunder Bay with an approximate arrival time of 10:00 am ET.” says Karen Matson, Marketing & Community Relations at North Star Air.
North Star Air’s team has been working with the “O” Division Royal Canadian Mounted Police (RCMP), participating in the ‘Toys for the North’ charitable drive. The initiative has evolved over the years to include a national network of RCMP, law enforcement, corporate and external partners who collectively contribute to the success of delivering new toys to children in our Northern communities. North Star Air has been a partner of the Toys for the North campaign for 5 years.
The arrival of the Hercules in Thunder Bay doesn’t mean the journey to the North is over. The toys, along with other donated goods and a very special guest, will be air-delivered next week to remote northern Ontario First Nations communities via North Star Air’s flight network.
“It’s an exciting time, knowing all this hard work will very soon bring many smiles to many faces in the North.” continues Matson. “We have big plans for December 13th when we actually fly in and visit with the recipient communities and celebrate Christmas alongside their community members.”
Once the cargo is debarked from the Hercules in Thunder Bay late Friday, Gardewine Freight Delivery will then move the cargo to their local warehouse where volunteers will sort the goods by age and gender per community. “We’re talking about thousands of toys that need to be sorted so that the next phase can continue as planned,” says Retired S/Sgt. Normand Roy of the RCMP. Roy plans on traveling with the group as a Veteran of the RCMP for his 8th season with the successful “giving” campaign. Roy continues, “….it’s for the kids. The smiles on their faces make it all worth it.”
The goods will then be transported by Gardewine Freight Delivery back to the North Star Air hangar on Hector Dougall Way where they will be loaded onto a Dash8 aircraft ready for their destinations. Joining Veteran S/Sgt. Normand Roy and Cpl. Stacy Morton of the RCMP this year on the trip north will be representatives from North Star Air, the media and our very special guest! Your favourite white-bearded jolly ol’ soul, the man in red himself, Santa Claus will be joining the celebrations and bringing joy to so many young people of the North as he personally hands out the toys. 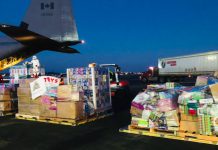 Toys for the North – The Journey Starts