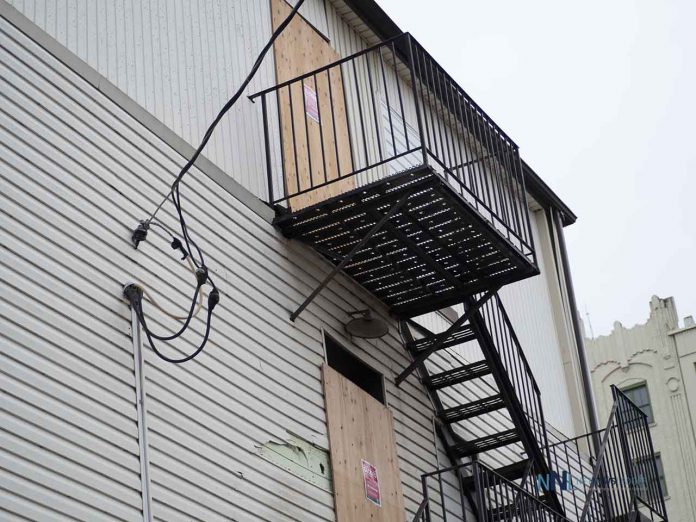 THUNDER BAY – The recent closure for health and safety reasons of the Oddfellows Hall on May Street South has left the former residents frustrated. People were reportedly given only a few hours to vacate the premises.

Sources tell NetNewsLedger that conditions were in a deplorable state, with only one toilet working and with issues over fire safety problems as well.

The closure has led to frustration that resulted in a break-in and then an assault.

Thunder Bay Police Service officers with the Uniform Patrol Branch were dispatched to the 100 block of May Street South at about 9:20 pm on November 26th, 2019, after reports of a break and enter.

Thunder Bay Police report that upon arrival at the scene, they discovered that two people, a male and female had been observed breaking into a secured entrance of the Odd Fellows Hall. The couple was confronted by a witness, who is the current manager of the building.

Police report that the two suspects assaulted the witness before fleeing the area on bicycles.

Uniformed Police officers located the two suspects together in the 200 block of Simpson Street about 20 minutes later. They were subsequently arrested and transported to the Thunder Bay Police Service headquarters.

A 51-year-old Thunder Bay female and John Robert SILVESTER, 78, also of Thunder Bay have been charged with Assault and Break and Enter.

NetNewsLedger has been told many of the former tenants have been left homeless following the closure of the Oddfellows Hall building. Councillor at Large, Aldo Ruberto who is a Board Member at TBDSSAB tells NNL that the director of housing tells him they are working with clients to meet their needs.

There is no report from Thunder Bay Housing as to the number of people left homeless following the closure of the building. The former tenants had received emergency shelter at local hotels that lasted until last Wednesday.