Squash has shown a significant resurgence in Thunder Bay over the past 3 years with almost 300 players playing on the city’s only available courts at the Games Complex. This year’s tournament continued to reflect the renewed interest in the sport. Not only were participation numbers up over past years but most significantly there were 3x more women playing in this year’s tournament than last – a great sign of the sport’s continued growth!

In addition to more female squash players in the tournament, the contingency of Juniors (under 18) represented primarily by Thunder Bay and Fort Frances, continued to show strong numbers, allowing for both a Junior A and B division. With solid junior development programs well established in both communities, it’s always encouraging to see high participation of youth at the tournament year over year.

Division finals wrapped up Sunday afternoon. After a wild A Division Final that saw Dale Cizmar relentlessly battle James Gill to win in 5 games, all attention turned to the Open A Division Final between Sean Cameron and Nick Persichino. With the crowd’s eyes locked on Court 1, Persichino started strong with a 2-0 lead. Cameron fought back, however, inching his way ahead to tie the match at 2 games a piece. Going into the final game, both players showed visible signs of fatigue but it would be Persichino who gave up the ghost first, falling 11-7 to Cameron in the 55-minute battle.

Final standings from the 8 divisions are as follows:

The organizers of the tournament would like to thank our sponsors, including Davlor Financial, Balmoral Legal Centre, Lakehead Roofing, No Frills, Dewhurst Insurance, Rollin’ Thunder, Canada Games Complex, Xamsa Squash, Dufresne and Control the T Sports. All funds raised from this tournament go directly toward the continued development of the Junior Squash program in Thunder Bay, helping with gear, training equipment, and travel to other tournaments throughout Ontario and the region. 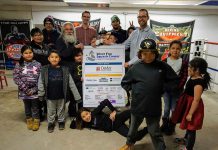