THUNDER BAY – The Thunder Bay Police Service have released video footage showing a group of suspects connected to a recent assault investigation at the Midtown Inn on Cumberland Street North.

Thunder Bay Police Service officers were dispatched to the Midtown Inn in the zero-to-100 block of Cumberland Street North at around 3:40 am EST on Tuesday, November 5, 2019 following reports of an assault in progress.

Police learned several individuals had forcefully entered a room in the hotel and assaulted two occupants. Weapons were involved in this assault.

Both victims were transported to the Thunder Bay Regional Health Sciences Centre for further treatment. Their injuries were non-life threatening.

As a result of this ongoing investigation, police obtained footage of the group of suspects at the Midtown Inn. That footage is now being shared with the public to assist police in identifying the suspects involved.

At this time police believe the incident was targeted, and not a random attack.

Assault at Midtown Inn has Police Responding in Force 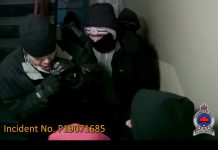