THUNDER BAY – Thunder Bay Police Service officers with the Uniform Patrol Branch were dispatched to the parking lot of a coffee shop in the 300 block of May Street South at about 6:45 pm EDT on Monday, October 28, 2019, following reports of someone being threatened with a weapon.

When police arrived they found out from a witness who saw a truck drive into the driveway of the business. The witness told police they had observed the male driver arguing with his female passenger.

The male and female exited the truck, at which point the witness observed the male push the female up against the vehicle.

The witness attempted to intervene to assist the female.

The male responded by retrieving a large machete from the truck, running toward the witness and threatening him.

Police officers located and arrested Gerard Cyril Tremblay who now faces charges of Assault with a Weapon and Uttering Threats.

He appeared in court earlier on Tuesday and was released with a future appearance date. 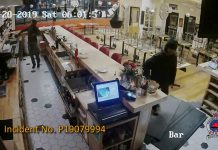 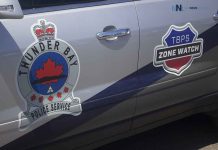