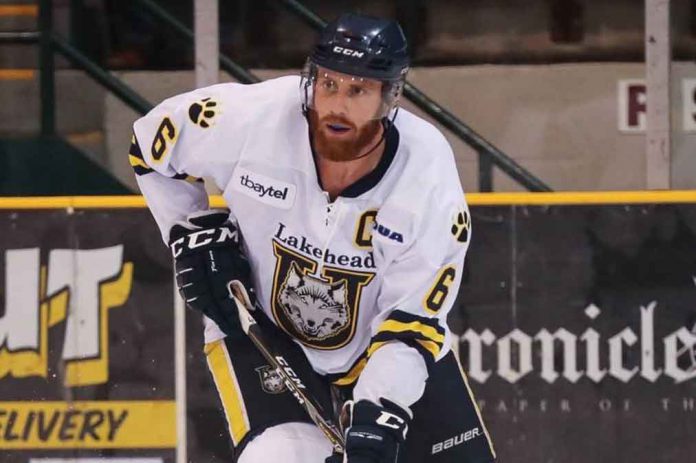 THUNDER BAY – SPORTS – The Thunderwolves forced overtime thanks to two third period goals but ultimately lost 3-2 to the Windsor Lancers Saturday night in front of a crowd of 1,940 in the Fort William Garden.

It was a slow first period as the starting goaltenders kept the doors shut on both sides of the ice, but things started to heat up when the Lancers took advantage of Lakehead’s two many men penalty in the second period.

Windsor defenseman Kody Gagnon and forward Ethan Skinner each recorded a goal in the second period to give the Lancers the lead as the game headed into the third frame.

The Thunderwolves came out flying in the third period. Just 57 seconds in Thunderwolves forward Tomas Soustal shot the puck top shelf, beating Lancers’ goalie Jonathon Reinhart and putting Lakehead on the board.

Soustal didn’t stop at just one goal. With five minutes and 40 seconds left in the third period, the Thunderwolves sophomore buried the puck into the back of the net, giving the Thunderwolves what they needed to send the game into overtime.

“We were down 2-0 after two periods, that’s a position we don’t want to be in,” said Soustal.

“It was nice to see the whole team battle back.”

Despite a tremendous comeback effort by the Thunderwolves in the third period, Windsor forward Trent Fox end the game 1:30 into overtime, winning the game for the Lancers and leaving Lakehead with only one point.

The Thunderwolves will be back in the Fort William Gardens next weekend for another homestand, as they host the Toronto Varsity Blues.