THUNDER BAY – Thunder Bay Police are continuing their investigation into a shooting on Dease Street in the city. There have been two arrests and there is a third suspect being sought.

Thunder Bay Police Service has arrested and charged a 17-year-old male with attempted murder in connection with the ongoing investigation into a recent shooting.

Police Service officers with the Uniform Patrol Branch were originally dispatched to 139 Dease Street around 9:20 p.m. on Tuesday, Oct. 8 following reports of a shooting that had just occurred.

When police arrived they located a lone male victim and confirmed that a shooting had taken place. Paramedics transported the victim to the Thunder Bay Regional Health Sciences Centre where he was treated for his injuries.

Major Crime Investigators identified Holly EMMA PAPASSAY, 48, of Thunder Bay as a suspect. She was arrested on Monday, Oct. 14 at about 3 p.m. at a McLaughlin Street address and formally charged with attempted murder.

Investigators later identified a 17-year-old male from the Toronto area as a second suspect. The suspect was arrested on Tuesday, October 15, 2019, in Toronto with the assistance of the Toronto Police Service. He was returned to Thunder Bay on Friday, Oct. 18.

The youth appeared in court Saturday and was remanded into custody with a future appearance date. The youth’s name is being withheld in accordance with the Youth Criminal Justice Act.

Police have identified and obtained a Canada Wide Warrant for the arrest of a third suspect in connection with this case. 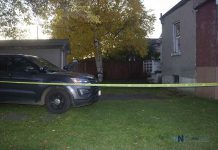