In a pair of outings over the weekend with Thunder Bay, the 20-year-old Cochenour, Ont., product racked up six points helping the North Stars post a two-game weekend sweep over the previously unbeaten Red Lake Miners.

Among Bruchkowski’s efforts was a single-game season-high five points Friday that featured the game-winning goal along with his initial SIJHL hat trick.

In four games since joining the club earlier this month, he has points in all of them, including five tallies, which features a pair of game-winning markers along with a power-play and shorthanded marker for league-leading Thunder Bay.

SIJHL – Play It Again Sports Players of the Week 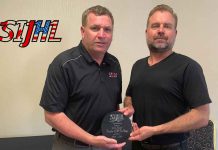