“It is time for the change that the people of Thunder Bay—Rainy River deserve,’’ said Yuk-Sem. “I want to be a strong voice for you in Ottawa. I know that people are tired of being neglected by Trudeau’s Liberals. People are tired of wondering if they’ll make rent by the end of the month. Crushing student debt is making it harder for graduates to start their lives. The NDP has a plan to help you and make life better for everyone.’’

The New Democrats say, “After four years of Liberals making the decisions in Ottawa, people are still struggling to make ends meet. Indigenous communities are still not getting the health care services they need. The NDP is committed to doing things differently so that no one is left behind”.

The campaign office is located at 831 May Street North. 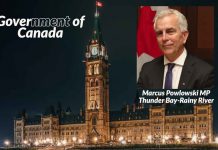