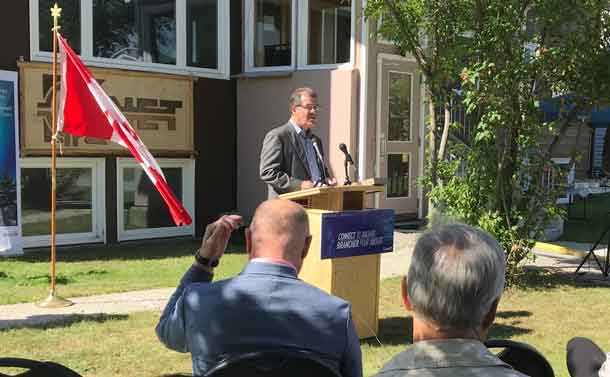 KENORA – POLITICS – “I choose to move forward, and I choose to invest in Northerners,” stated Bob Nault, the incumbent MP in the Kenora riding as Campaign 2019 gets underway. The campaign to re-elect Bob Nault, Liberal Candidate for the Kenora riding, began marking the start of the 43rd General Election campaign.

“When I came back to politics in 2015, it was clear that after a decade of the Harper Conservative Government, the North had fallen further and further behind. That’s why we ran on a plan to invest in the middle class that would make our economy in the North stronger,” stated Nault.

“And that’s exactly what we did. We made investments to help families in the North, cut taxes for the middle class, and raised them on the wealthiest 1%. In addition, since coming into office, over 1 million jobs have been created. Add to that, unemployment is now at historic lows. In short, we have helped make the North even stronger.

“However, I know there is still lots of work to do. In a riding like Kenora, I believe that Experience Matters. Being an MP is not an entry-level job.  It’s also extremely important to understand the unique and diverse needs of all our residents in a riding that is 1/3 of Ontario’s landmass.

“In this election, we have a choice. We can choose to move forward, and keep building on the progress we have made, or choose to go back to the negative politics of the Harper years. Canadians well remember the Harper years, which were years of cuts and austerity to those most vulnerable. I am confident that Canadians don’t want to re-live the past”.

Minister of Finance Invited to Kenora for 2020 Pre-Budget Consulations