THUNDER BAY – POLITICS – Thunder Bay-Superior North MP and federal cabinet Minister Patty Hajdu sat down with NetNewsLedger to share what the TBSN MP has been working on through the summer.

As Canada heads to a federal election expected to be called in early September, Minister Hajdu says that the campaign efforts through the summer have been ongoing throughout her term keeping in touch with local leaders and ordinary citizens.

Minister Hajdu says that issues around jobs at Thunder Bay’s Bombardier plant are sitting on the desk of Ontario Premier Doug Ford as the federal government can not dictate transit infrastructure to the province.

The Minister shares her views on the Ethics Commissioner’s report on SNC Lavalin and the Prime Minister.

Heading into the federal campaign, NetNewsLedger.com’s Politics 2.0 seeks to bring you ongoing and comprehensive coverage of the region and the campaigns. 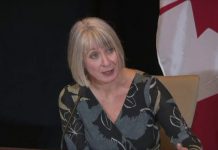