SHOAL LAKE #39 FN – An incident on Sunday in Shoal Lake #39 First Nation has lead to ten charges being laid.

In a statement issued to media, Treaty Three Police Service say they received a report of a firearm being discharged at a residence in the First Nation Territory of Shoal Lake #39 Ontario.

There were no injuries were reported by the occupants of the home.

Treaty 3 Police sought and received assistance from the OPP and RCMP in an effort to locate the person and vehicle involved.

The vehicle was located by the RCMP in Falcon Lake, Manitoba after departing from Shoal Lake #39.

The male driver was arrested following a motor vehicle collision after attempting to flee from the police.

A warrant for his arrest has been issued as this investigation continues.

The public is reminded to please contact Treaty Three Police Service with any information associated with this investigation or to contact Crime Stoppers at 1-(800) 222-8477 (TIPS). 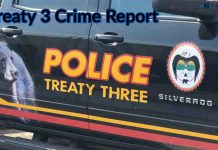 Lockdown in Shoal Lake #39 Over – Suspects in Custody 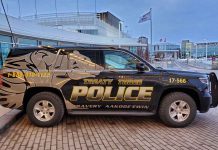