THUNDER BAY – SPORTS – The Thunder Bay Border Cats arrived back in Thunder Bay this morning at 9 am after their road trip. Tonight, following an afternoon baseball clinic with fifty young baseball players, the team took to the Port Arthur Stadium field for an evening doubleheader against the St. Cloud Rox.

The Rox are looking to take command of their playoff plans heading into the three-game wind up for the Border Cats 2019 season.

The Rox got off to a 1-0 lead in their half of the first inning.

In the top of the 4th inning #1 for the Rox drove a high fly ball to deep centre field allowing #3 Luke Ira to cross the plate for a two-run lead.

Jordan Larson got off a great hit taking the ball deep to right field for a strong stand-up double. That hit, with two out, brought the fans to their feet. However, Joe Jimenez strong swing of the bat was caught for the third out ending the inning.

In the Cat’s half of the fifth. Anthony Gallati led the Cats off with a single. The inning closed out without the Cat’s crossing the plate.

Heading to the 7th inning, the Rox were up by two runs.

Rox #14 Parker Smejkal advanced to second with a double. Smejkal then advanced to third base on a wild pitch putting him in scoring position.

Walker then advanced to third base following a spinning shot hit into the infield by #23 F. Achecar which was handled by handled by Galleti.

The next batter, #3 L. Ira  then got a single which allowed Walker to score.

Jordan Larson led off the Cats in the 9th. Larson hit to deep centre field in a solid hit but it was caught for out #1.

Joe Jimenez then took the bat at hand for the Cats. Jimenez drove a hard line drive to the third baseman who then threw him out at first.

Triston Lundgren then headed to the batter’s box to face #27 G Delano who has remained strong through seven full innings. Lundgren went down swinging.

Final Score of the first game was 4-0 for the St. Cloud Rox.

One might have thought that after an all-night bus ride, then a long day session with the little leaguers, and losing in a shutout in the first game that the Cats might have  come up a little tired in the second game.

However it was an entirely new team of energized Cats who took to the field for the second game.

The second half of the Double-Header started with each side going down without scoring.

However the Cats exploded for five runs in their half of the second inning.

The Cats sprung to a five to nothing lead following that effort.

In the fourth inning, Jakob Newton drove two runs on a stand up double. But he was tagged out trying to steal second base getting caught by the Rox in a hotbox.

Jordan Lawson got off a solid single but was left on base as Joe Jimenez was called out on strikes.

Heading to the bottom of the fourth the Cats lead 7-0.

The Rox got on the scoreboard as #4 Zack Elliotwas driven home by Jake Elliott who was called out at first plate for the first out of the inning for the Rox.

The Rox got it going in the fifth inning scoring three runs to make it closer.

The sixth inning was scoreless with the Cats doing some fantastic fielding to make sure the Rox were kept off the scoresheet.

Heading to the seventh inning the score was 7-3 for the Border Cats.

The Cats were held off the scoresheet in their half of the seventh.

The Rox DH G Delano led off and got on base. However the Cats rallied with a double play to put the team one out from the win.

Then on a bouncing ball hit by the Rox it was an easy out.

Sunday the Season Winds Up

Its family fun day at the game.

The attendance for tonight’s games was 1525 the highest of the season. 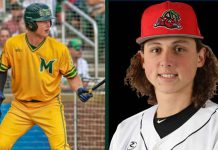 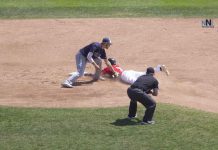