The footage lasting about 1 minute, shows an Awa tribe member in the woods holding a knife, seemingly unaware he is being filmed

RIO DE JANEIRO (Thomson Reuters Foundation) – Rare video of one of Brazil’s last uncontacted indigenous tribes has been released to help raise awareness about threats to their survival, campaigners said on Tuesday.

The footage, shot by indigenous filmmaker Flay Guajajara and lasting about 1 minute, shows an Awa tribe member in the woods holding a knife, seemingly unaware he is being filmed. A second member holds a bow and arrow, and both leave after appearing to notice their observers.

“This video shows that they do not want to be contacted, not even by the Guajajara,” said the filmmaker, himself a member of the Guajajara tribe and part of Midia India, a charity that gives voice to indigenous communities in Brazil.

The Guajajara live near the Awa, hunter-gatherers described by indigenous rights group Survival International as the world’s most threatened tribe, in the Arariboia territory in the state of Maranhao.

Campaigners say land disputes are not uncommon in the area of the Awa reservation, surrounded by farms and illegal logging operations. Guajajara regularly patrol to protect the Awa.

The clip, shot by chance during a Guajajara group hunting trip, is part of a documentary on the Awa, “Ka’a Zar Ukize Wa – Forest Keepers in Danger,” premiering on Tuesday in Sao Paulo.

“They want to live in peace, on their lands,” said Erisvan Guajajara, coordinator for Midia India.

“The footage is a cry for help,” he told Thomson Reuters Foundation, and the film a call to action, shedding light on threats to Brazil’s indigenous tribes. 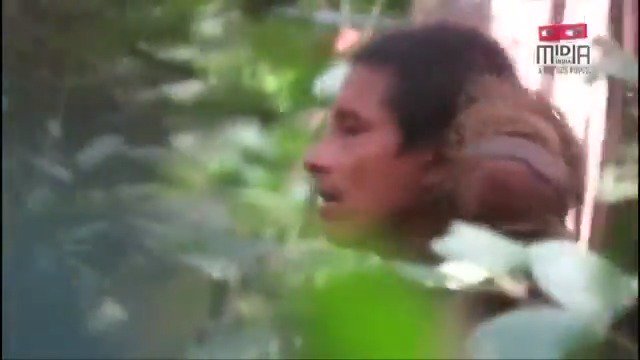 159 people are talking about this

Brazil’s uncontacted tribes, among the last on Earth, depend on unspoiled forest to hunt animals and gather food. They are particularly vulnerable when their land rights are threatened because they lack immunity to the diseases carried by outsiders, activists say.

While the clip exposes members from the uncontacted tribe, they said the situation is so dire that the need for awareness outweighs risk.

“When we are talking about the possible genocide of a people, it’s important to show that they exist,” said Sarah Shenker, a Survival International campaigner.

Shenker, whose organization has helped broadcast the clip internationally, said the initiative is part of an effort to give voices to indigenous peoples, which she said “Bolsonaro wants to silence.”