Ottawa, ON – The federal Conservatives are pouncing on a number of appointments announced by the Prime Minister. The Conservatives in a media release state, “This morning media reported that the Trudeau Liberals had appointed 5 individuals with close relationships to a senior Liberal cabinet minister to judicial appointments in New Brunswick.”

In response, Andrew Scheer, Leader of Canada’s Conservatives and of the Official Opposition, released the following statement:

“Once again, the Trudeau Liberals have been caught red-handed abusing the power of their offices to reward their rich and powerful friends.

“Canadians saw this during the SNC-Lavalin corruption scandal, when Justin Trudeau tried to protect his corporate friends. They saw it when Trudeau handed millions of dollars to Loblaw’s, a multi-billion company, to buy new fridges. And they’re seeing it again today, with close personal friends of a Trudeau minister getting government appointments.

“Of course, Trudeau has set the tone for this government. He was the first Prime Minister in Canadian history to be found guilty of violating Canada’s Conflict of Interest laws, which sent a message to his entire cabinet that it’s okay to play fast and loose with the rules to reward their friends and punish their enemies.

“When it comes to Justin Trudeau and the Liberals it has always been about who you know, not what you know. He promised to be different, but clearly, Justin Trudeau is Not as Advertised.” 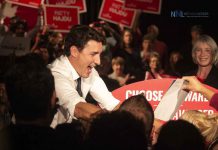