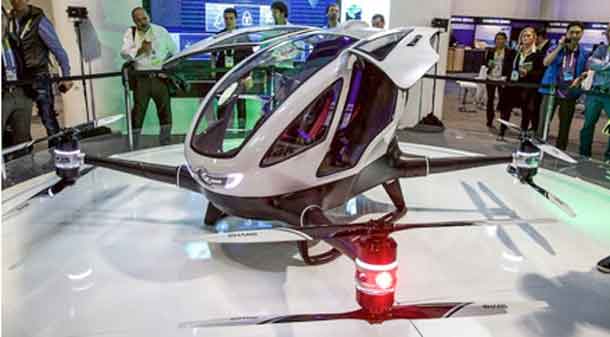 “What’s not clear is where property rights end as far as national airspace starts. And that’s been our big issue”

WASHINGTON (Thomson Reuters Foundation) – Blacksburg was already well prepared when the U.S. government announced in April that the Virginia town would be home to the country’s first commercial drone delivery service.

Virginia Tech University, based in Blacksburg, has for years hosted a major drone development programme, which has carried out experimental deliveries of ice cream, fast food and more.

“I moved (to Blacksburg) last August, and when I was telling people I was moving, they said, ‘I know somebody there had their Chipotle (Mexican restaurant chain) delivered by drone!'” said Megan Duncan, a communications professor at Virginia Tech.

So, when Wing became the first drone company to be approved as an air carrier by the federal government, allowing the Google parent Alphabet Inc company to start drone deliveries in and around Blacksburg, many of the locals were excited, Duncan said.

“I think there are super-interesting possibilities for remote areas that are underserved, particularly with people who need prescriptions and can’t make a 45-minute drive,” she told the Thomson Reuters Foundation by phone.

But Duncan, who has done studies on public perceptions of drones, also foresees a looming problem: the potential for people to see drones flying over their yards, en route to filling a neighbour’s order, as trespassers on their property.

She recalled a recent talk she gave in Chicago in which some audience members “were completely convinced that if a drone flew over their house, they had the absolute right to destroy (it).”

“People really believe they own everything above their property,” she said.

In recent years, there have been several cases of outraged U.S. landowners shooting down privately owned drones — and the response from courts has been mixed.

Concerns about drones — among the public, event planners, security officials and others — has given rise to an industry of anti-drone technology designed to take down the devices.

Most of those tools are not legal for purchase by the general consumer in the United States, according to a report from the Center for the Study of the Drone at Bard College in New York.

But that has not diminished demand: The maker of the DroneDefender, which blocks a drone’s signals and forces it to land, said in emailed comments that the company receives “many, many inquiries” from people in the United States wanting to buy one.

A Wing spokeswoman said the company currently had nothing to share about the new Virginia operations, which are yet to begin, but noted it would “act in compliance with all applicable rules and regulations needed to conduct our operations”.

But some of those rules are unclear, property experts warn — in part because the traditional airline industry has never had to address the issue of flying through someone’s garden.

Under U.S. law, the federal government claims “exclusive sovereignty of airspace” in the country, but where that line starts has always been fuzzy, said Stuart Banner, law professor and property expert at the University of California, Los Angeles.

“Landowners also own the airspace above their land. Otherwise, it wouldn’t be possible to build houses or anything else above the ground,” he said.

At the same time, “there’s no clear answer as to how high a landowner’s airspace rights extend,” Banner added.

According to the agency in charge of these issues, the Federal Aviation Administration (FAA), drones “shouldn’t be operated over people or in a way that endangers property on the ground”, spokeswoman Lynn Lunsford said by email.

But it does not distinguish between airspace over private property and other types, nor does it specify minimum altitudes that drones can fly, she said.

Further, another FAA spokesman said, as an aviation safety agency, “our regulations do not address privacy.”

But it is in the areas of privacy and property rights that tensions between the public and drone technology are rising.

“Here’s the biggest problem: The law is just not clear,” said Stephen Rice, an associate professor at Embry-Riddle Aeronautical University in Florida, as he urged a “nationwide set of regulations that make it very clear what you can and can’t do”.

Rice and another researcher at Embry-Riddle, Mattie Milner, found that “people, in general, aren’t very happy about the idea of a drone … flying over their home”.

“Their biggest fear is that their privacy will be invaded,” Milner added.

This summer, an independent group of experts plans to finalize a “model law” that states could adopt to clarify and harmonize some of the issues around drones and private property — but its efforts have been controversial.

Early versions by the Illinois-based non-profit Uniform Law Commission would have required permission for a drone to operate within 200 feet (60m) over any private property, said Steve Willborn, the group’s interim executive director.

That idea created a firestorm of pushback from the drone industry, with companies saying that in some parts of the country those restrictions would cut in half the amount of airspace they could use.

Instead, the group came up with a two-tiered approach, said Willborn.

A drone touching private land or anything on it without permission would be a trespass, but otherwise a landowner would need to show that the drone had interfered with the use and enjoyment of the property.

That could include factors such as how high the drone was flying, how loud it was, and if it had cameras on board, he said.

But critics say there is no need for a new law.

The Uniform Law Commission is trying to change property law “as we know it” to deal with concerns that already fall under existing laws on privacy and other issues, said Diana Marina Cooper of PrecisionHawk, a drone and data company.

“We need to address the underlying concerns for property owners, but that doesn’t need to be done by changing rights to airspace,” she said.

The question of how to balance the rights of the public with the needs of the drone industry is already a concern for cities such as San Diego, one of 10 jurisdictions taking part in a federal programme to speed up the development of drone technology.

“What’s not clear is where property rights end as far as national airspace starts. And that’s been our big issue,” Vinson said.

Still, the city has experience dealing with the intersection of new technology and property considerations, she added.

She pointed to recent conflicts stemming from bike-sharing and e-scooter programmes, with vehicles blocking sidewalks and wheelchair accessibility, or being left on private property.

“Now we have to add this new component, and we need to think about where these drones fit into the picture,” Vinson said.