THUNDER BAY – A potentially life-threatening situation resulted in a solid performance by Thunder Bay Fire Rescue’s new Rescue boat performs admirably during its first trial by fire. The work of firefighters saved them from the cold waters of Lake Superior in the Thunder Bay Harbour.

At approximately 13:30 on June 15/19 Thunder Bay Fire Rescue received a report of a woman in the water at Marina Park close to the playground area. 4 pumpers, the new rescue boat and the Platoon Chief responded.

The female did not respond to officer pleas for her to swim back to shore. Paramedics from Superior North EMS and firefighters with Thunder Bay Fire Rescue also attended.

The female was having difficulty keeping herself above water but continued to swim farther away from shore. At this point, Police officers decided to put their personal safety aside and enter the water in an attempt to rescue the female.

The officers swam to the female, who resisted their rescue attempts. The officers held her while hanging onto a buoy until Thunder Bay Fire Services arrived with their boat to assist in removing the female and officers from the water.

The woman and two police officers who had entered the water to assist her were holding onto a mooring buoy approximately 100 meters from shore. Within minutes of being dispatched the boat arrived on scene and all three were removed safely from the water, cold but otherwise unharmed.

The woman was treated by Superior North EMS at the scene and transported to the Thunder Bay Regional Hospital. 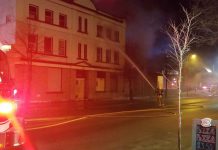