HOUGHTON, MICH- In late March, the NPS discovered a translocated wolf’s GPS collar transmitting a mortality mode signal.  The wolf (W006M) was a black-coated male translocated to the park from Ontario, Canada, in late February.

NPS personnel, unable to access the island, had to wait until the park reopened for the 2019 season to investigate.  The wolf was located in the middle of Siskiwit swamp, a large wetland complex at the southwest end of the island.  NPS personnel and cooperating investigators from State University of New York-College of Environmental Science and Forestry (SUNY-ESF) using coordinates provided by the GPS collar traveled five miles into the swamp to recover the carcass and determine the cause of death.

The GPS collar quit transmitting two weeks prior. Investigators found no apparent signs of injury or struggle, however, the carcass was in a very deteriorated state due to melting snow and wet conditions, making an accurate cause of death determination impossible.

Annual survival of wild wolves in the nearby Upper Peninsula of Michigan is approximately 75% or conversely, approximately 25 % annual mortality can be expected. “After translocation of 11 wolves this winter it was a disappointment to learn of this mortality and even more frustrating that the carcass could not be accessed in a timely way for a detailed necropsy” said Mark Romanski, Division Chief of Natural Resources for the park.  “A few weeks prior this male was traveling with one of the females translocated from Minnesota in October 2018.  It would have been nice to see them stay together.”

The island’s wolf population now totals 14 wolves, 12 successfully translocated from Minnesota and Canada plus the two wolves that remained on Isle Royale before the initiation of wolf reintroduction efforts.  The new wolves are beginning to form loose associations with one another as seen by overlapping GPS coordinates at the same time and place.  A female wolf (W001F) translocated from Minnesota in September of 2018 and two male wolves ( W007M and W013M) moved from Michipicoten Island, Ontario, Canada, this winter have been traveling together since early April.  “While GPS data indicate these three wolves have been together on numerous occasions, it’s too early to tell whether we have a makings of a wolf pack,” said Romanski, “but it is reassuring that we have wolves spending time together and feeding.”

The NPS along with partners from SUNY-ESF have initiated a study to look at summer predation and are using GPS locations to determine “clusters”, a group of consecutive GPS locations within 50 m (55 yds) of one another, for investigation as to whether wolves have made a kill, are scavenging, or perhaps just resting.  This data will help managers and scientists determine the impact the wolf population has on the island’s moose population and document predation of other species such as beaver and snowshoe hare.  Less commonly discovered is the predation of snowshoe hare.  Akin to finding a needle in a haystack, searching two clusters each an area of nearly 0.8 hectares (two acres) field technicians discovered two probable snowshoe hare predation sites this past week; often all that remains at these sites are the feet, which wolves typically do not consume.

“We will continue to monitor the movements of wolves year round and use social network models to help  determine the timing of pack formation and other aspects of wolf organization and predation on the island” said Jerry Belant, Camp Fire Conservation Fund Professor at SUNY-ESF. 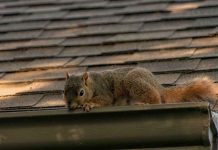 Will Wildlife Control Canada Be A Busy Industry This Winter Season? 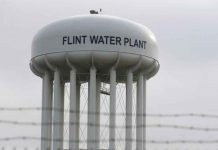 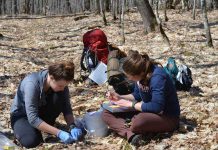