NIPIGON – A traffic accident has resulted in charges for a Toronto woman.

On Saturday, May 18, 2019, approximately 10:00 am officers of the Ontario Provincial Police (OPP) Schreiber Detachment responded to a report of a collision on Highway 17 Syine Township (east of Terrace Bay, ON) involving a westbound vehicle.

As a result of the investigation, police found the female operator of the vehicle to be a suspended driver. Police observed improperly stored marihuana which was readily available to the driver, a subsequent search of the vehicle and occupants located approximately 440 grams of cocaine and a large knife. Further investigation determined the male passenger had provided police with a false name.

As a result, Magdalene Porras a 24-year-old female from Toronto, ON is charged with:

Also, a male 16-year-old young person of Toronto, ON, who cannot be identified as per the Youth Criminal Justice Act (YCJA), was charged with the following offences:

Both were held for a video bail hearing on Sunday, May 19, 2019, at which time they were remanded into custody. 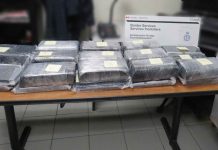