20-year-old Dishanti Ezekiel Dillon and 19-year-old Tyrese Oneal Wright, both from Scarborough Ontario, are charged with:

• Possession of a Controlled Substance for the Purpose of Trafficking (2 counts each)
• Possession of Property Obtained by Crime over $5,000
• Obstructing a Peace Officer

Both men have been remanded into custody for their next court appearance on May 23, 2019. 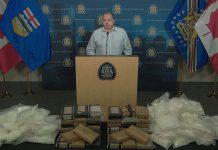