COCHRANE, Ont. – A Ryan O’Hara goal, 8:44 into the second period, proved to be the game-winner as the Oakville Blades (OJHL) went on to edge the Hearst Lumberjacks (NOJHL) 2-0 Saturday evening in the championship game of the Dudley-Hewitt Cup Central Canadian Junior A Championship in front of nearly 1,000 fans that were jammed into the Tim Horton Events Centre.

With the victory, Oakville now advances to represent the Central Region at the Canadian National Jr. A Championship, May 11-19, in Brooks, Alta.

An action-packed opening period failed to produce a tally, but there was no shortage of opportunities in the fast-paced session.

The best chance to commence the scoring in the goalless first frame came midway through as O’Hara was taken down on a break and awarded a penalty shot.

However, Hearst netminder Nicholas Tallarico was equal to the task, outwaiting the shooter, before making a left pad save.

O’Hara did convert in the second stanza though as some hard work along the end boards by Holden Doggett allowed him to feed the open Oakville forward in the slot where he made no mistake, snapping a quick shot low blocker side to put the Blades in front.

It stayed 1-0 for the OJHL champions through the remainder of the second.

A smooth-flowing final stanza saw the time fly by as the two sides skated end-to-end at a feverish clip.

Picking up a late power play, and with Tallarico on the bench in favour of an extra attacker, Hearst pressed for the equalizer, but it was the Blades that sealed the outcome as defenceman Nicholas Aromatario put one into an empty net, for a shorthanded marker at 18:28, to give Oakville their first Dudley-Hewitt Cup title since 2010.

Will Barber finished with 29 stops to post the shutout for the victorious side, who put 29 attempts on the Lumberjacks net.

Player of the Game honours went to the Blades’ O’Hara and Hearst’s Tallarico.

Also, the Dudley-Hewitt Cup awards were presented post-game, with the winners determined through round robin competition.

They were as follows:

Oakville advances to Canadian National Jr. A Championship, May 11-19, in Brooks, Alta. 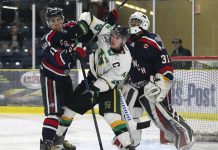 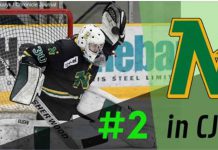