SIOUX LOOKOUT – The Sioux Lookout Detachment of the Ontario Provincial Police (OPP) are investigating an incident that took place on Thursday, April 18, 2019, at approximately 2:30 pm at a local business on Queen Street, in Sioux Lookout.

Police are trying to locate a Caucasian female involved in the incident, who is described as being approximately 50 to 60 years old, medium height and build, with short black hair and glasses. She may have ties to the Sioux Lookout Meno Ya Win Health Centre. 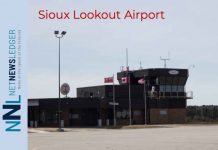