OTTAWA – Bob Nault, Member of Parliament (Kenora riding) released the following statement regarding the provincial government’s decision to remove the role of the Environmental Commissioner:

“Indeed, it was no April Fool’s joke; yesterday marked the removal of Ontario’s Environmental Commissioner, Dianne Saxe. This is just another item in the long list of things that the provincial conservatives have done to completely ignore climate change.

“It is no secret that the Ontario government has taken a number of steps which disregard evidence-based suggestions on how to reduce climate and air pollution. They have removed the drive clean program, issued a stale Environment Plan which fails to address some of the larger concerns, such as energy conservation, and of course, the most recent step of removing the Environmental Commissioner all together.

“However, the Commissioner did not leave without getting in a final word. Her final report, “A Healthy, Happy, Prosperous Ontario: Why we need more energy conservation”, makes a very strong call for supportive government action to improve energy conservation and reduce energy waste. Despite this suggestion, which is echoed by climate scientists around the world, the Ford government continues to cut environmental programs.

“These decisions were made in the face of a study commissioned by Environment and Climate Change Canada, “Canada’s Changing Climate Report” (CCCR), which states that, over the last 70 years, Canada’s average temperature over land has warmed 1.7 Celsius, with higher rates seen in specific areas, including the North. In fact, Northern Canada is heating at three times the global average, and Canada is warming at twice the global rate.

“The provincial conservatives have chosen to ignore it, but climate change is real. At the federal level, we will continue to take measures to address pollution and improve conservation efforts because we know it is the right thing to do for our environment.” 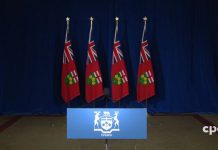