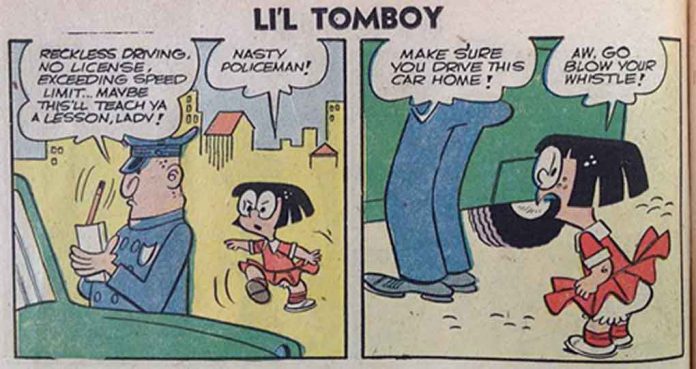 COLUMBUS, Ohio – Not all strong females challenging gender roles in the comics were superheroes like Captain Marvel or Wonder Woman.

Some were just regular girls with a bit of attitude and names like Little Iodine, Little Lulu and, yes, Nancy. And at least one – Li’l Tomboy – pushed the boundary of what girls could do in comics even further.

In her new book Funny Girls: Guffaws, Guts and Gender in Classic American Comics, author Michelle Ann Abate examines the groundbreaking and overlooked role those young girl protagonists played in classic comics during the first half of the 20th century.

“Girls like Li’l Tomboy were not superheroes in the conventional sense, like Wonder Woman, but they did have heroic qualities,” said Abate, professor of literature for children and young adults at The Ohio State University.

“They were spirited, outspoken and strong.  They affirm the existence of strong female protagonists during the Golden Age of comic books.”

Some of the classic girl characters, like Nancy and Little Orphan Annie, are still well known today.  But it is easy to overlook how groundbreaking these comics were at the time, Abate said.

“We tend to frame the current explosion of female characters in the comics as a new thing, but it is part of a longer tradition,” she said.

“There have been strong female protagonists in comics from the beginning.”

The earliest girls in comics, like Little Orphan Annie, which debuted in 1924, did show some spunkiness that challenged the gender roles of the time.  But they also didn’t stray too far from societal norms, according to Abate.

Little Orphan Annie stood up for herself, fought when necessary and talked back to adults on occasion.  However, she also relied on Daddy Warbucks to rescue her when things got out of hand.

“She was independent and capable and resilient, to a point. But Daddy Warbucks was still there as a backup,” Abate said.

“The same was true for other girls in the comics, like Nancy.  She was sassy, but was still within the confines and structures of white, middle-class suburban families.”

One theme in many of the early comics featuring girls was the names: Li’l and Little were often added, from Little Orphan Annie to Little Lulu, Little Audrey and Little Iodine.

“Her name might be Iodine, but she was still little, cute and adorable.  The diminutive added to the name made them less threatening,” she said.

But if there was one girl in the comics of the time who added at least the hint of threat, that may have been Li’l Tomboy, according to Abate.

“People remember Nancy and Little Orphan Annie. I think Li’l Tomboy was that gem that most people haven’t heard of, but maybe was the most interesting one of the whole group,” she said.

Released in October 1956, Li’l Tomboy was published for three years, featuring a character who didn’t act like an average white, middle-class girl in this postwar period.  She had a conventionally feminine appearance, but her behaviour did not match her frilly clothes.

As her name implies, 5-year-old Li’l Tomboy wasn’t doing what girls in the 1950s generally did. She didn’t like dolls, got into frequent fistfights and enjoyed playing football with the boys.

“She was a juvenile delinquent, to be honest.  She trespasses, commits petty theft, throws a rock through a window and talks back to police officers. It goes beyond being naughty,” Abate said.

Li’l Tomboy used being a cute, white, feminine, middle-class girl to her advantage.  She was with a boy when she threw a rock through a window – noting that he would be blamed and not her.

Most remarkably, Li’l Tomboy was published during the time of the Comics Code Authority, which governed what was appropriate content for young children to read.

The authority was established by the comics industry in 1954 in response to widespread public concern over what was thought to be inappropriate content presented in comics.

The comics code was so strict that authorities once censored a comic that showed beads of sweat on a character’s head. But, somehow, Li’l Tomboy got away with a lot that even boys couldn’t do in the comics.

“Li’l Tomboy looks stereotypically cute and innocent and the people with the comic code must have thought she couldn’t do anything really bad.  But her behaviour certainly seemed bad.”

Abate said the female characters in comics of this time sent a message to the boys and girls who read them.

“They said that girls can be just as feisty and strong and fun and mischievous as boys can,” she said.