FORT FRANCES – The issue of the shuttered Resolute Forest Products mill in Fort Frances came up at the Fort Frances City Council meeting this week, as well as being the subject of a question at Queens Park during Question Period on March 26, 2019.

Douglas Judson, a Councillor in Fort Frances made this statement:

“As many of you know, I have been closely involved in the Town’s efforts to reopen the Fort Frances mill and to secure a stable, equitable supply of wood fibre to support our local economy.

“The Town’s working group continues to be engaged on this file, and despite disappointing news last week, I want to ensure our constituents that we still have tools at our disposal and there is an ongoing discussion between the province and the corporate parties involved. We will continue to be part of that discussion and to advocate for the province to use every means available to protect our community’s key economic asset.

“None of us should accept the proposition that this is a private business deal in which the public has no role. After all our community and governments have invested in this facility, we will not stand by while a private transaction threatens to strip the economic benefit of publicly owned forest resources from our District. Those benefits should be prioritized for this community, and we are not done fighting.

‘I want to commend Mayor Caul and our Administration for their leadership and continued efforts on this important file”.

Today in Queens Park, NDP Northern Development critic Michael Mantha said the Ford government must ensure access to wood supply for northern mills and forestry operations, to support the hundreds of jobs that depend on them.

Mantha said the future of one mill in Fort Frances is in jeopardy, and another mill in Thessalon is cutting jobs because the Ford government is failing to allocate wood supply.

“Your government controls the wood rights on crown lands. It also has the legal obligation to involve First Nation communities in meaningful consultations, but like the Liberals, this government is sitting on its hands instead of taking action,” said Mantha, MPP for Algoma-Manitoulin, during question period in the legislature.

“And just last week a 30 percent workforce reduction was announced at Midway Lumber in Thessalon.

“Will this government tell the families from Fort Frances, Thessalon and across the North, that it will ensure that mills and forestry operations have the wood they need to operate and support the hundreds of direct and indirect jobs that depend on them?”

Mantha said that over the last 15 years, mills and forestry operations have closed all over Northwestern Ontario.  That includes at least five in Thunder Bay, two in Dryden, two in Kenora, one in Sioux Lookout and one in Fort Frances.

Mantha reminded the Ford government that in 2014 when the PCs were in opposition, they supported wood allocation to reopen the Fort Frances mill — only to reverse position now and fail to come to the table. 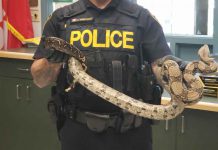