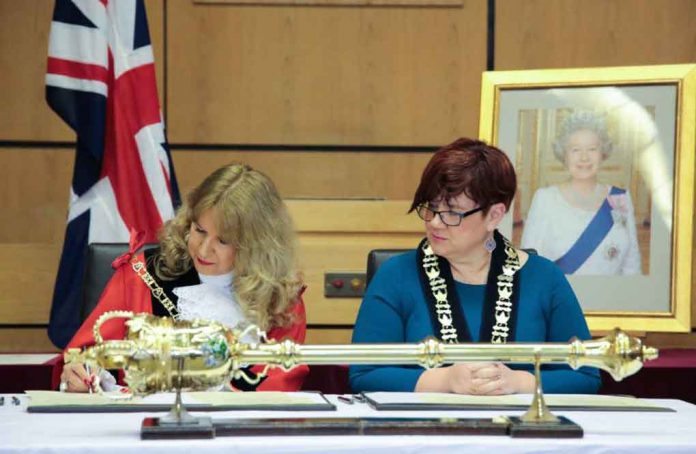 BROMLEY – An historic friendship agreement between Thunder Bay, Canada and the London Borough Bromley has been signed.

The Worshipful Mayor of Bromley, Councillor Kim Botting FRSA, along with Councillor Kristen Oliver, signed the agreement marking more than 100 years of friendship which started during World War I and commemorates the sacrifice Canadian soldiers made for freedom. Many are buried in Canadian Corner at All Saints’ Church in Orpington, and in recognition of their heritage, the headstones face west towards Canada.

Councillor Kristen Oliver said “I am delighted to be here with our friends. A friendship that was forged during the First World War when we built Orpington Hospital for wounded Canadian troops.”

The Mayor of Bromley and President of the Royal British Legion, Orpington, Councillor Kim Botting FRSA said, “I am proud to say that the friendship, which first started during the Great War, continues to this day and we will never forget that the Canadian soldiers made the ultimate sacrifice, with so many more suffering terrible injuries and being treated in our Borough, in Orpington in particular. Today’s friendship agreement formalizes the relationship between London Borough of Bromley and the Canadian city of Thunder Bay which is based on over 100 years of shared history and remembrance.”

Over 100 years ago, Orpington was selected as the site for the Ontario Military Hospital which saw Orpington Hospital built by the Ontario government in 1916. At the time, it was one of the most modern and best-equipped hospitals of its kind in the world. Plastic surgery and treatments for shell shock were pioneered at the hospital and by the time it closed, three years after the end of the war, it had treated more than 38,000 wounded soldiers.

Councillor Colin Smith, Leader of Bromley Council, says, “One hundred years on, Orpington hospital’s Canada and Mackenzie wings remain proud and deeply poignant reminders of Orpington’s historical connection with Canada and its brave servicemen. Today’s friendship agreement is designed to ensure that connection not only endures but grows ever more strongly moving to the future. As the generations who actually remembered what happened pass on, we must redouble our effort to never forget. That spirit of commemorative remembrance, mindful of the enormous sacrifices made, is central to the formal hand of friendship we are extending in the agreement with our friends from Thunder Bay.”

The event continues Friday 8 March at 10 am with a visit to All Saints’ Church, Bark Hart Road, Orpington and a short service at Canadian Corner where 88 Canadian soldiers who died at the hospital are buried.

This will be followed by a visit to Orpington Hospital where the Mayor will unveil a plaque commemorating the friendship agreement. After this, the Canadian delegation will visit Biggin Hill Airport and the Memorial Museum at the St Georges Chapel of Remembrance, where there is a permanent remembrance to Canadian pilots who were based in Biggin Hill during World War II.